During a meeting with Russian President Vladimir Putin in China, Czech President Miloš Zeman took a characteristic swipe at the media. Caught on mic just ahead of a joint press briefing with Mr. Putin, Mr. Zeman noted that there were too many journalists present and that they should be “liquidated”. While the joke raised a polite smile from Mr. Putin, it triggered a volley of negative reactions in the Czech Republic where media freedom and efforts to influence the free press are now very much in the spotlight. Miloš Zeman, Vladimir Putin, photo: CTK It was the few seconds between the actual talks and the subsequent meeting with the press that made headlines and completely overshadowed the Putin-Zeman talks in China. Seeing the throng of journalists from the doorway Zeman was unable to resist a swipe at the press with whom he has notoriously bad relations, addressing Mr. Putin in Russian.

“More journalists? There are too many journalists. They should be liquidated” the Czech president said, turning to the Russian leader. Mr. Putin kept his cool, giving a polite smile and noting that “liquidation” was unnecessary; their numbers could just be restricted. The exchange was caught on microphones and the recording was played and replayed not just in the Czech Republic. The Russian media were not amused. Memories of Anna Politkovska, killed in her own home, the attack against Oleg Kashin and other incidents of violence against journalists are fresh in people’s minds.

Czech politicians were quick to condemn the president’s words. Foreign Minister Lubomír Zaorálek said the remark was in extremely bad taste. Marián Jurečka, deputy chair of the Christian Democrats, noted that making such a joke in the presence of the Russian leader in whose country journalists die mysterious deaths, was unforgivable. Czech MEP Pavel Telička suggested that the incident showed that Mr. Zeman was no longer fit for office and should not be running for a second term.

The embarrassing statement from Mr. Zeman comes hard on the heels of a scandal surrounding Finance Minister and Deputy Prime Minister Andrej Babiš, who was recently confronted with secretly made recordings which show that he attempted to influence media coverage in the Mladá fronta Dnes daily, a paper he formerly owned, against political rivals. The revelations have caused utmost concern both at home and abroad and the state of the Czech media and their possible abuse are an issue on the agenda of a June meeting of the European Parliament. Journalist and former dissident Jan Urban says that attempts to influence the media and a lack of respect for independent journalism are widespread in the post-communist bloc. 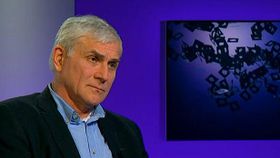 Jan Urban, photo: Czech Television “This tendency has been present here for quite some time, as it is in Poland and Hungary, not to speak about Russia. So it is high time the European Parliament started paying attention to it.”

What should best be done to address the problem?

“Definitely we need a European-wide discussion about the methods used in the former communist countries towards NGOs and the media. These issues should be discussed on a European platform.”