Andrej Babiš’ aim of forming a minority government made up of ANO ministers together with experts got backing from President Miloš Zeman even before an official meeting on Tuesday. Speaking to Czech Radio’s flagship station Radiožurnál, the president said he preferred a minority cabinet to a stable coalition without clear goals. On the other hand, it might simply be a tactic to bring other parties to the table. 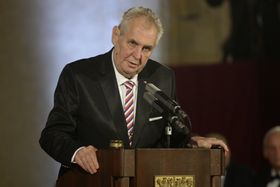 Miloš Zeman, photo: CTK President Miloš Zeman has made clear that a minority government may be one way forward for Andrej Babiš after early talks with other parties following the elections produced few results: all parties, with the exception of Tomio Okamura’s Freedom and Direct Democracy party, rejected overtures to either enter into a coalition government or provide support it in a confidence vote.

Mr Babis’ plan now is to form a cabinet which would be made up of ANO ministers as well as experts. In the president’s view, a minority government could prove far more effective than coalitions where policies are often watered down by compromise. As a former prime minister himself who led a minority government for four years, he made clear he preferred a minority cabinet at this point even to a stable coalition.

“I wouldn’t even wish for [a coalition] now. You have to understand that politics are about compromise, but compromises sometimes go too far, so that in the end opposing plans by parties cancel each other out and you get nothing done.”

The president suggested Mr Babiš, the prime minister-designate as of Tuesday, had more tools in his box: pitching a minority government was one idea but could also be tactic to scare others to come to the table and deal.

“It is a threat, saying if you don’t come in with us, we’ll form a minority government. In politics, threats are used a lot and it is part of the art of politics. [That doesn’t mean it isn’t a serious option] but it might not be the only one.” 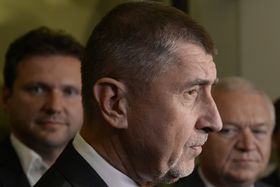 Andrej Babiš, photo: CTK And he used a barnyard analogy to drive the point home:

“All hens say they won’t give it to the rooster. Have you ever seen hens in the courtyard? They run around in two or three circles until one of them gets cornered by the rooster.”

How things will end up is anybody’s guess but the president made clear he would give Mr Babiš all the room necessary – without obstruction on his part – to get things done. After all, he said, Mr Babis finished far ahead of anyone else (78 mandates compared to 25 for the second-place Civic Democrats).

The Civic Democrats have been adamant they don’t want to deal with Babiš, as have others, but they may be less pleased if Mr Babiš begins cherry picking selected members of their teams for experts and sow discontent and distrust amongst themselves.