Czech President Miloš Zeman on Tuesday addressed a session of the Council of Europe and took hard-hitting questions on issues of human rights versus economic diplomacy, the Czech stand on migration, and his opposition to sanctions against Russia. 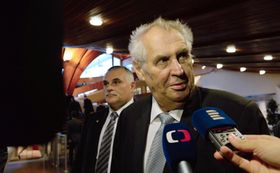 Miloš Zeman, photo: CTK On a visit to the Council of Europe, an institution whose aim it is to uphold human rights, democracy and rule of law on the continent, President Miloš Zeman, a strong advocate of economic diplomacy and fierce opponent of migration, was clearly expecting to face some hard-hitting questions.

Speaking in English, the Czech president cut short his address to give him more time to respond to questions from the assembly. As on previous occasions he came out strongly against the EU sanctions levelled against Russia.

“Please understand me well. I am not speaking about the justification of the sanctions, I speak about the efficiency of the sanctions. And just today the German daily Die Welt published an article which says that the European Union is losing out as a result of the sanctions and there is practically no damage for Russia. I would say that it is a lose-lose strategy.“ Vladimir Putin, photo: Archive of World Economic Forum, CC BY-SA 2.0 As an alternative to sanctions Zeman recommended people to people communication on many levels – an exchange of students, tourists, entrepreneurs, politicians and academics – saying that and an exchange of ideas and the power of words was something the former Czechoslovak communist regime had feared enormously for good reason. Levelling sanctions against Russia, he said only had the effect of bringing the nation together and strengthening the power of President Vladimir Putin.

“If you wish to increase the popularity of a leader –and now I am not speaking only about Mr. Putin – then apply sanctions and blockades. Because psychologically there is the myth of the “surrounded fortress”. A surrounded fortress needs a strong leader and Putin’s popularity is growing all the time. Now Mr. Putin has 80 percent public support and I am sure that a very substantial part of this popularity has been provoked by the sanctions alone.“

Mr. Zeman added that like it or not, the annexation of Crimea was a fait accompli and that unless Europe wanted to risk war over Crimea it had to seek better solutions. He said one idea would be for Ukraine to get some form of financial compensation for Crimea from Russia, or else free deliveries of crude oil or natural gas.

On another hot topic – migration - the Czech president stuck firmly to his position – no to economic migrants. He said the European Union needed to change its policy on the migrant crisis with much greater emphasis on helping the states from which migrants are fleeing. 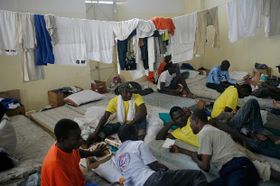 Photo: European Commission "We must help migrants in their domestic countries. This means that money from European states’ national budgets is necessary to finance, for instance, electricity, schools, hospitals, water resources, and so on. But I repeat – in the domestic countries of those migrants, not in European countries."

Mr. Zeman said there was more reason for this policy that just fear of terrorism.

“I will speak here about brain drain. If young healthy men leave their countries, their homelands, they weaken the economy and the brain-drain may condemn those countries to permanent backwardness.”