Czech Prime Minister Bohuslav Sobotka has called for the EU to take join action in protecting the alliance’s outer borders. Following talks with the visiting French foreign minister, Laurent Fabius, Mr. Sobotka stressed the urgency of a coordinated effort to stem the growing flow of refugees, saying that failure to do so could see individual countries reinforcing their own borders and undermining the basic concept of Schengen. 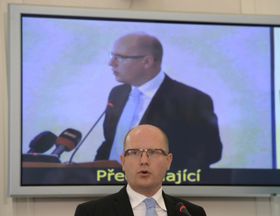 Bohuslav Sobotka, photo: CTK Europe must take coordinated measures to protect its outer borders or risk losing one of the pillars of European integrity –the Schengen border free zone. That was the message voiced by the Czech prime minister as thousands of illegal migrants streamed across the Macedonian-Serb border heading for Germany. Speaking to journalists in Prague, Mr. Sobotka said coordinated action was long overdue.

“The migrant crisis is a pan-European problem. It is a challenge that we cannot run away from. There is now a great deal at stake –among others the future of the Schengen border-free zone.”

The Czech prime minister said that while each country was coping with the problem as best as it could, it would be far more effective to provide aid to the EU buffer states and help them reinforce the EU’s outer borders. The Czech Republic has been pushing the idea for some time and has in the past weeks and months offered Italy, Greece and Macedonia technical and material assistance to help secure their borders better. The negotiations have so far produced no tangible result. The prime minister said it was clear that the EU buffer countries could not be left to handle the crisis alone and argued that all EU members should contribute to the effort.

Although the Czech Republic is not an end-destination country for migrants it is on the main transit route from the west Balkans to Germany, where tens of thousands of illegal migrants are headed. With the country’s asylum facilities fast filling up Czech officials have discussed the possibility of calling on the army to help secure the country’s borders, but a decision on that has been left as a last resort in the hope that the EU would take coordinated action on its outer borders before such a step proves inevitable. 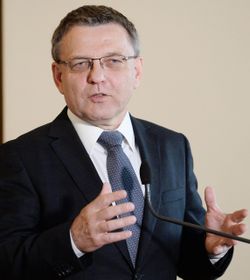 Lubomír Zaorálek, photo: CTK The Czech foreign minister, Lubomir Zaoralek, told Czech Television on Monday that with the escalation of the migrant crisis Europe must start differentiating between refugees and economic migrants.

“When you look at what is happening –that there are five thousand migrants crossing Macedonia in the course of two days –then it is clear that Europe cannot take in everyone. We cannot turn away refugees whose life is at threat –such as the people fleeing from Syria and Eritrea, that is against our principles, our common values – but I think it is a big mistake not to differentiate between economic migrants and refugees. No one is doing that at the front lines – in fact migrants in Greece just receive a plan on how to proceed along the Balkans route to Western Europe.”

The Czech Republic has repeatedly brought up the issue of joint protection of the EU’s outer borders in bilateral talks and says it wants to table the initiative at the next EU summit.