Czech Prime Minister Andrej Babiš has hailed the agreement on migration reached after nine hours of gruelling talks at an EU summit in Brussels as a huge success for the Visegrad Group’s common policy. The newly-appointed head of government, who has vehemently fought the idea of mandatory quotas, said the focus had shifted with the accent now on voluntary cooperation and the need to resolve the migrant crisis outside of Europe. 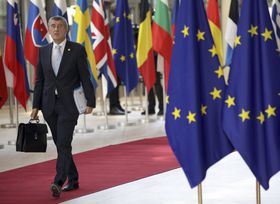 Andrej Babiš, photo: Olivier Matthys /AP/ČTK The Czech prime minister went into the EU talks with a clear agenda – sticking to the common position of the Visegrad Group states that Europe must revise its approach to the migrant crisis by abandoning the idea of mandatory quotas, enforced solidarity and sanctions and waking up to the fact that the migrant crisis must be resolved outside the European Continent.

The Czech Republic has lobbied for the setting up of asylum processing centres in northern Africa where economic migrants could be weeded out from refugees and stressed the need to do much more to fight people smugglers for whom the crisis has become a lucrative business. The prime minister stressed that Europe’s problem was that many EU leaders accepted the fact that migrants were streaming to Europe and then frantically sought a solution when they were here. It was time to stop the boats – Babiš stressed.

At the end of a tense night of talks, which failed to disguise the deep rifts over the migrant issue, and threats from Italy to block the summits conclusions on all issues, EU leaders reached a compromise solution. They agreed to set up asylum processing centres in and outside of Europe and restrict migrant movement within the bloc. And they made it clear that all this would be carried out on a "voluntary basis" by willing member states.

The Czech prime minister said this was highly satisfactory.

“The Visegrad Group was able to push through all it intended, meaning no quotas, that any relocation of migrants would only take place on a voluntary basis and that Europe will try to set up hotspots outside of Europe as well.” 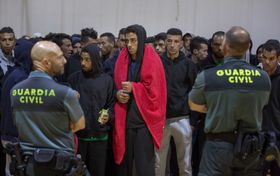 Photo illustrative: Emilio Morenatti /APPhoto/ČTK The prime minister particularly welcomed the agreement to tighten the EUs external border and increase financing for Turkey, Morocco and other North African states to prevent migration to Europe. He said the fact that migrant hotspots or processing centres would be set up outside of Europe was a positive move that must go hand in hand with renewed efforts to fight people smugglers.

The Czech prime minister, who stirred controversy ahead of the summit by suggesting that NGOs were assisting the smugglers in their lucrative business, said he had heard similar views at the summit from other officials. His words elicited a sharp response from the head of the Czech branch of Doctors Without Borders Pavel Gruber who said the organization had a choice between saving lives and letting thousands of people drown.