Czech attention focused Wednesday on the parliamentary vote of confidence in ANO leader Andrej Babiš’ government. But with the outcome of the vote a largely foregone conclusion, a lot of the attention was also on the appearance of outgoing president Miloš Zeman as he fights for five years more as head of state. 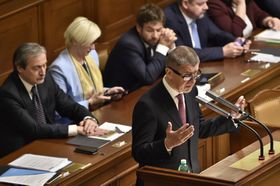 Andrej Babiš, photo: CTK The first vote of confidence in Andrej Babiš’ minority government has been discounted as largely a formality. But the prime minister nonetheless outlined his government’s main policy points and urged other parties to think of Czech citizens and the country and give him backing. He rounded off a nearly one-hour speech with this appeal:

"We say that our [ANO] movement is for everyone. Those of you who identify yourselves as on the right or left, we are for everyone. We have a [policy] programme for everyone and that’s why in conclusion I think that you should support us."

Babiš said parts of the government programme already reflected the ambitions of other parties and repeatedly underlined that he is open to talks and negotiations with them.

So far, Babiš can only count on his 78 lawmakers in the 200-seat lower house for support. The last hopes of widening that backing appeared to be cut the previous day when the Communist Party of Bohemia and Moravia (KSČM) announced it would be voting against. They complained that a crucial point for them was a commitment from Babiš’ government to tax a multi-million crown settlement, mainly with the Catholic Church, for communist era confiscations.

The communists, with just 15 seats, had previously hinted they might tolerate the government. But a meeting of the ANO Cabinet a few hours ahead of the vote so it could back such taxation.

The second vote of confidence in an ANO government, promised by president Zeman, should be much more of a test with pressure mounting on other parties to fall into line if only to avoid the prospect of early general elections.

But Wednesday’s vote, was largely overshadowed by another election, the first round of presidential polls taking place on Friday and Saturday with 73-year old Miloš Zeman seeking another five year term.

So far, Zeman has refused to take part in debates and other appearances alongside the other eight presidential candidates. Zeman maintains he is conducting a ‘non-campaign’ and that it should be his record in office that speaks for itself. 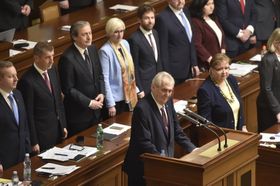 Miloš Zeman, photo: CTK Zeman in his 30 minute speech said he was favourably impressed by the ANO government programme and by its ministers. He backed promises of a better deal for pensioners, called for stepped up investment in infrastructure, cuts in the number of civil servants. And he returned to a long running hobby horse, his opposition to the inclusion of mentally handicapped children in normal schools. Opposition politicians attacked it as an election speech.

Zeman rounded off his comments with this call to lawmakers:

"All of you here are winners and it is necessary to be aware of that. You are winners thanks to the confidence put in you by voters. I would like to congratulate you on that and hope that you will demonstrate that by effective work for the Czech Republic."

Smiling and without any stumbles, Zeman’s appearance in itself sought to answer one of the main questions surrounding the presidential elections – concerns about his health and ability to continue to fulfil the functions for a further five years.