The eyes of ice hockey fans worldwide are focused on Vienna where the Ice Hockey World Championships are underway. As the NHL season was cancelled in the United States, national teams this year feature their strongest players and true stars. But perhaps the most important and yet the humblest participant in the games is - the puck. It may come as a surprise that at this year's championships as well as in previous years, all the pucks have been produced in the Czech Republic.

The Czech Republic is a country with a great ice hockey tradition and continues to supply foreign league teams with first-class players, Dominik Hasek, Jaromir Jagr and Patrik Elias, to name but a few. So it rather makes sense that the country has become one of the world's leading producers of ice hockey pucks and also the general supplier for the World Championships.

"Our company was founded in 1990 and at first we made ordinary rubber products. We started producing ice hockey pucks in 1994, after the Vsetin team made it for the Czech Republic's Extraliga."

Michaela Brabencova of the family business Gufex, based in the village of Katerinice near Vsetin not far from the Slovak border. The company, which employs only four people, exports pucks virtually everywhere that ice hockey is played, from South Africa to New Zealand.

"As far as foreign markets are concerned, it all started with the Winter Olympics in Nagano in 1998, where our pucks were used for the first time after having passed many complex tests. Then we started cooperating with the International Ice Hockey Federation which carried out another set of tests and issued certificates for us. Since 1999 we have supplied pucks for all Ice Hockey World Championships." 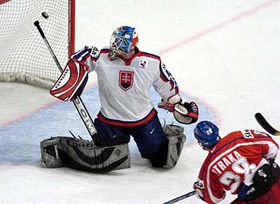 Photo: CTK The 2,700 pucks delivered to this year's championships in Vienna are more of a matter of prestige for the Moravian company because as far as the volume of production is concerned, the tiny firm can produce up to 5,000 of them a day.

Michaela Brabencova says that what distinguishes Gufex pucks from all the others is a special, top secret formula used to make the rubber. They don't smear the ice and the quality of the printing is also important because the colour must not peel off. For all that the pucks have to "mature" for at least a couple of weeks. Although Michaela Brabencova admits she herself is no staunch fan of ice hockey, these weeks are a quite a special time for the family business.

"Our employees are certainly supporting the Czech team. I myself went to Vienna to watch a game. So I think these two weeks are very interesting, we are following the games very keenly."