This weekend we celebrate what is for all of us here at Vinohradská 12 a rather important birthday. May 18 was the day back in 1923 when Czechoslovakia began its first regular radio broadcasts. To mark the event we shall be bringing you a special programme on Sunday, looking back to those pioneering days. Here is a quick foretaste of what we have in store.

It all started exactly 85 years ago at 8.30 pm on May 18 1923, and the opening announcement went like this: “This is the broadcasting station Radiojournal in Kbely near Prague. We are broadcasting on the frequency 1150 metres.” The announcer was Míla Kočová – who in those pioneering days also doubled as the radio company Radiojournal’s secretary! At the time it was a private company – the state didn’t acquire a majority stake until a couple of years later - and at the beginning radio was still very much a toy for the rich.

This was to change very fast indeed and by 1938 there were well over a million radio licence holders in Czechoslovakia. As far as the content is concerned, in the pioneering days they would only broadcast in the evening - with music, sports news and weather forecasts from the Meteorological Office. There were no news bulletins and the nearest they came to news was a quick glance in the papers, which Míla Kočová would buy on the way to work.

Radiojournal did not move to our current headquarters until the mid 1930s. In fact the first studio was a canvas tent, set up next to the transmitter in Kbely on the eastern edge of Prague. In Sunday’s programme we shall be hearing an archive recording of Radiojournal’s very first sound engineer recalling how they used to have to chase stray dogs away - and when the wind got up they would retreat into the wooden shack by the transmitter. 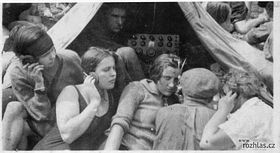 We shall also have an early recording of President Tomáš Masaryk, reminding a group of 1920s schoolchildren to wash and exercise regularly, and the head of Radiojournal’s music department in the mid 20s warning listeners of the dangers to the nervous system presented by casual listening to the radio. And a highlight will be a rare recording of the great German writer Thomas Mann, in exile in Czechoslovakia 1936, calling for radio to be used as a tool to enlighten the masses. His message has a particular poignancy given that this was a time when Goebbels was using radio propaganda to do just the opposite.