August 21st, 2008 marks 40 years since Warsaw pact troops moved into Czechoslovakia, crushing the reform movement known as the Prague Spring. The invasion shocked many Czechs who came to the defence of the Czechoslovak Radio building (now Czech Radio) on Vinohradská Street. Dominik Jun was there in the run up to the commemoration and filed this report. 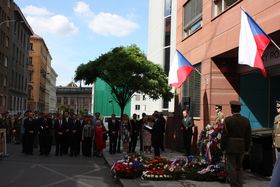 Photo: Štěpánka Budková “I’m standing on Vinohradská road in the centre of Prague in front of the old Czech Radio building. As you can hear, there’s lots of building work going on at the moment. The interior of the building is gutted as it is being reconstructed. But here, forty years ago today, tens of thousands of people gathered to protect this building from the invading Warsaw Pact troops that were coming essentially to suppress the aspirations of the Prague Spring. There then followed a storming of this building with numerous casualties. Today, there is a special commemorative event taking place, but it won’t be here, it will be round the corner because this building is being reconstructed…” 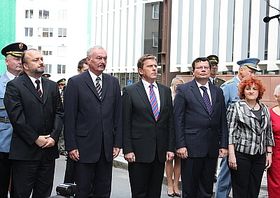 Ladislav Jakl, Přemysl Sobotka, Miloslav Vlček, Alexandr Vondra, Vlasta Parkanová, photo: Štěpánka Budková “I’ve now moved round the block to the new Czech Radio building, where very shortly the commemorative service to mark the fortieth anniversary of the Warsaw Pact invasion will begin. Numerous dignitaries are scheduled to speak, beginning with the head of Czech Radio Václav Kasík; also the chairman of the Czech Senate Přemysl Sobotka, the chairman of the Czech lower house Miloslav Vlček, the deputy Prime Ministr Alexandr Vondra and the mayor of Prague Pavel Bém. There then will be a signing of the Czech national anthem.” Václav Kasík, photo: Štěpánka Budková I spoke with Czech Radio head Václav Kasík shortly before the ceremonies began and started by asking him to explain the historical context for today’s remembrance ceremonies:

“That was a day when the development of our country was in one single night completely broken. And this led to completely different conditions in this country. Those of use who were old enough to realize what was going on very soon realized just how serious a development this had been. It also led to widespread emigration by those that predicted what was to come.”

And what exactly happened at the Czech Radio building? 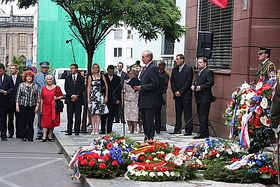 Přemysl Sobotka, photo: Štěpánka Budková “It was essentially a battle between overwhelming forces and unarmed people, but make no mistake, it was a battle. Czech Radio as a major media outlet was a prime target right at the outset, but after it was taken over, it continued to broadcast from secret locations for another seven days. It was a form of resistance shown by Czechs who tuned in not just to gain hope but also information.”

Fifteen people paid with their lives to defend the Czech Radio building before it was taken over, and it is these casualties that remained at the forefront of today’s ceremonies at Czech Radio: 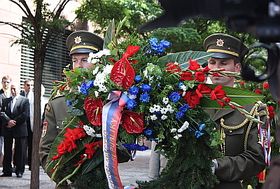 Photo: Štěpánka Budková “A Czech Army brass band is just playing as a succession of soldiers, dignitaries, and protesters and people who were there at the time in 1968 are laying various wreaths in front of the Czech Radio building. There are probably several hundred people here as well as many cameras - members of the press.”

In his speech, the chairman of the senate Přemysl Sobotka thanked members of staff of Czech Radio both past and present:

“Let me also thank today’s employees of Czech Radio, but I also wish them that neither they nor we will ever have to experience again in our streets the kind of events that occurred in 1938, '45, '48 or '68. Thanks to Czech Radio and thank you all for coming.”