Czech Rep 3 - USA 2: the Czechs get their revenge

An ancient Klingon proverb has it that "Revenge is a dish best eaten cold" - and when it comes to ice hockey that applies two-fold: exactly a year ago Team USA knocked the Czechs out of the World Ice Hockey Championship in a famous penalty shoot-out in Prague. This year, in Vienna, things were a little different. Once again it was the quarter-finals; once again it came down to the goalies. But this time the Czechs prevailed. 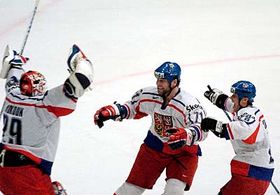 Photo: CTK It was a game of nerves not for the faint of heart. Anyone tuning in late might have felt early pangs of despair at the end of 2nd as the score read USA 2 - Czech Republic 0. The Czechs were down despite outgunning the Americans with a barrage of shots. To be fair the U.S. players were quick and fast too, and in the end they - unlike the Czechs - had found the back of the net.

Could the Czech team come back? 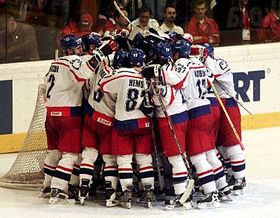 Photo: CTK At the start of the third period defenseman Jiri Slegr rattled a slapshot that hit goalie Rick DiPietro's mask, and for a few seconds afterwards the goaltender donned the facemask of fellow goalie Ty Conklin, while his own was repaired. The Czechs skirmished in front of the net... and scored.

A 2nd goal soon followed and the game was tied. Both sides skated furiously and both had opportunities when the goalies were down and out. Shots went agonisingly wide. Soon it was sudden death, but fans watching the game in Prague remained confident that the Czechs would win:

"We always believe! The Czechs are the best! We're not intimidated by the Americans: this year we'll turn it around!" 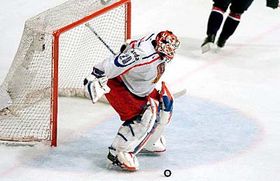 Photo: CTK Anything can happen in overtime - though nothing did - which meant that it came down to penalty shoot-outs to finally settle the game.

The Czechs went up first on a backhand by Martin Rucinsky.

After that it was a mind game, fans at the edge of their seats staving off heart attacks. Could Czech goalie Tomas Vokoun blank the U.S. and erase the ghosts of a year past?

The final U.S. shot came down to last year's "villain" Andy Roach. But, this time Vokoun read the play - and turned the tables, catching Roach's shot in his glove hand. 3:2 the final score in favour of the Czechs.

The biggest Czech sports successes of 2005, and a quick look ahead to next year

Sport is one area in which the Czech Republic often punches above its weight, and some of the country's top sports stars - such as… 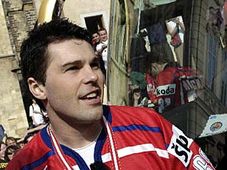