With the onset of winter conditions for migrants have severely worsened. Greece was the fifth country to activate the EU Civil Protection Mechanism asking EU member states for humanitarian aid to help deal with the influx of refugees to its shores. Among the countries to respond to the request is the Czech Republic which is sending relief aid to the tune of 4.2 million crowns. 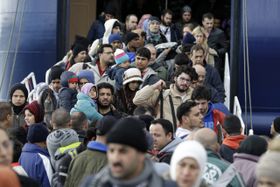 People disembark from a ferry after their arrival from the Greek eastern Aegean islands to the Athens' port of Piraeus, January 4, 2016, photo: CTK Greece is one of the EU member states hardest hit by the refugee crisis and it has come under increasing pressure from Brussels with regard to its inability to control migrant flows, secure the EUs outer borders and provide decent conditions for refugees. After months of resisting offers of assistance, Greece finally succumbed to pressure from EU governments in December. It activated the so-called Civil Protection Mechanism, which is there for any EU member state that feels overwhelmed by a crisis, asking for more EU support and relief aid in the form of tents, generators, beds and first-aid kits for the thousands of migrants it is having to accommodate.

Among the nine EU member states who responded with offers of assistance is the Czech Republic which is sending relief aid to the tune of 4.2 million crowns. The assistance is financed by the state and is being transported to Greece by a team of Czech firefighters. Nicole Zaoralova, spokeswoman for the General Directorate of Czech Firefighters, provided details of the mission.

“The consignment bound for Greece is made up of 2,000 sleeping bags, 2,000 disposable blankets, 500 inflatable beds, 10,000 disposable raincoats and 40 heaters for solid fuel. These are items that we permanently have in storage for times of crisis such as floods, meaning that they can be packed up and sent at very short notice. The consignment is expected to leave the Czech Republic on Wednesday and eight firefighters will travel with it to make sure the aid is delivered safely.” 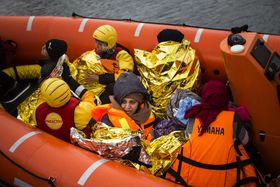 Refugees and migrants arrive at the village of Skala, on the Greek island of Lesbos, after crossing the Aegean sea from Turkey, January 2, 2016, photo: CTK The consignment will be taken to Mandra, a suburb of Athens, where international aid is accumulated and from where it will be dispatched to various refugee camps. Last year the Czech Republic sent similar deliveries of relief aid to Hungary, Slovenia, Croatia and Macedonia.

The Czech government has repeatedly highlighted the need for concerted EU action in the migrant crisis and stressed its readiness to help deal with the crisis outside the country’s borders not just in terms of relief aid for migrants but by offering technology, police officers and soldiers to help EU buffer states secure the union’s outer borders. Last year the Czech Republic sent soldiers, police officers and technology to Hungary and Slovenia for this purpose and the prime minister has made it clear the country would respond positively to requests from other EU member states as well.