A week after Ottawa brought back visas for Czech citizens over the large numbers of Czech Romanies seeking asylum in Canada, the Czech government put out a report on the state of Romany communities in the Czech Republic for 2008. The report is bleak: Czech-Romany relations are bad, it says, and will be difficult to fix. 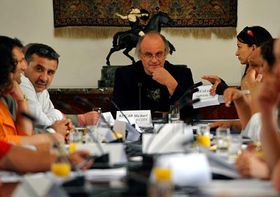 Michael Kocáb (center), photo: CTK A 40-year-old Romany woman from the town of Frýdek Místek, in northern Moravia, came to one of the town’s hospitals in 2007 to give birth to her fifth child. Allegedly under pressure from a local social worker, she agreed to undergo sterilization. This is the latest case of a Romany woman claiming to have been sterilized against her will. If confirmed, it will counter the general assumption that this practice, for which the Czech Republic was repeatedly criticized by the EU, human rights watch groups and other organizations, ceased some eight years ago. Elena Gorolová is the spokeswoman for the Group of Women Harmed by Sterilization, an Ostrava-based support group.

The minister for human rights and minorities, Michael Kocáb informed the Czech government of the case on Monday. It underlined the bleak situation of the Czech Romany as Mr Kocáb also presented his colleagues with the report on the state of the Romany communities for 2008. The report says that Romanies in the Czech Republic face general discrimination. A surge in right-wing extremism, poor social conditions and a growing gap between the majority and minority population is driving increasing numbers of Romanies abroad. One of the authors of the report is Gabriela Hrabáňová, the head of the government’s council on Romany issues.

“Since unemployment is generally rising in the Czech Republic, among those affected are also Romanies. That’s one side of the problem. The other is that the rise in extremism and the general attitude towards the Roma are not getting any better. So the Roma simply no longer want to experience discrimination against them in everyday life, and they decide to leave the country.”

The report, and the news of the forced sterilization case, came less than a week after Canada reinstated visas for Czech citizens. The reason is a 400 or so percent increase in Romany asylum seekers in that country this year. 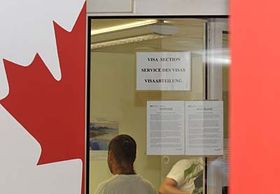 Photo: CTK But some Czechs as well as some Czech politicians feel that Romanies are leaving the country for the sake of getting more generous social benefits. The town hall in Litvínov, in north Bohemia, wants to make sure that local Romanies who left for the UK – another popular destination with Czech Romanies, do not receive social benefits in both countries. The town’s mayor, Daniel Volák, plans to send out letters to town halls in Britain to bring the abuse to an end.

“I believe that adequate repression is necessary in this matter because the system gets abused. Look, if people did not get the benefits twice, we wouldn’t be doing this. But as long as there are people ‘parasiting’ on the system that’s paid for with public funds, with our taxes, our duty is to take care of it, and repression is adequate.”

Mr Volák says his town does many things for the Romanies already. But some of them will abuse the system all the same, and that should stop. 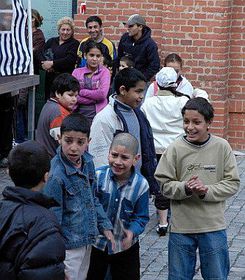 “We provide education for Romanies that is above standard; we have five field workers here who explain to them exactly the social benefits system but there are always parasites who will simply draw the benefits twice. And these measures are aimed at them, not against decent people.”

Gabriela Hrabáňová, from the government’s Romany issues council, says a new strategy of Romany integration should be ready by October. It would provide municipalities with advice on how to treat poor living conditions of the Romanies, bring them out of ghettos, and motivate them to send their children to school. But Ms Hrabáňová also believes it would help if people realized that there might be other reasons than social benefits that make Romanies leave the Czech Republic.

“Those who go abroad seeking the economic conditions, it’s not just because of their economic situation, but also their social situation. It’s very much about being an invisible minority and living in a country where your work, whatever it is, is considered important.”