Scientists from the Faculty of Fisheries and Water Protection at the University of South Bohemia have successfully bred a new breed of carp – the most common fish in Czech rivers and ponds. The Amur Mirror Carp is the first new fish breed created in the Czech Republic in more than twenty years and as its name suggests, it is related to a carp living in the remote Amur River in Asia. 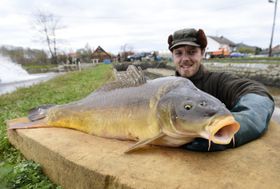 Photo: CTK Carp, the fish mostly associated with Czech Christmas, has been bred in the country for centuries, and although its consumption among Czechs has been declining in recent years, it is still one of the major export commodities. In order to keep up with the demands of the market, fish farmers need to breed new, more resistant varieties.

Martin Kocour, vice dean at the Faculty of Fisheries and Water Protection at the University of South Bohemia, has long been involved in the research of the Amur Mirror carp. He outlined the main reasons behind trying to create a new variety, a process which started back in 1993:

“We wanted to improve carp production and to make it more effective. And in order to do that, we have to continue in selective breeding of carp all the time. So this was the main task for us.

The name of the new carp breed, Amur Mirror Carp, is based on its main ancestor, the Amur Wild Carp. The main difference between the common carp varieties and the new one is the absence of scales. Martin Kocour again:

“It is in fact a slightly different species of carp compared to carps living Europe and in the Czech Republic. At the first sight it is almost impossible to distinguish the breed from the others. It has the same size but in fact their shape is more prolonged and the oblong body shape which resembles the original scaly ancestor.” Photo: CTK Although the scaly carp is more common in the Czech Republic than its non-scaly relative, foreign consumers apparently prefer the latter. At the moment, more than 50 percent of Czech fish production is exported. So although fish farmers actually prefer scaly carp to those without scales, since they are more resistant and easier to handle, they have to respect the demands of the market.

So far, the Amur Mirror Carp is only kept in fish farms for breeding purposes, so Czechs, who will spend summer holidays at one of South Bohemia’s numerous ponds, are not likely to come across the new breed. 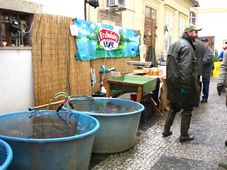 Inspectors from the State Veterinary Authority are planning to carry out checks on around 30 percent of stands stalls selling carp,… Fisheries gearing up for Christmas carp sales around the country, but overall consumption remains low

Czech fisheries are gearing up for the annual Christmas carp sales around the country, when sales of home-bred carp go through the…