Czech scientists: extinction of dinosaurs was caused by asteroid collision

65 million years ago a huge cosmic body crashed into the Earth, causing large fires all over the globe. The sudden change of climate wiped out most of the planet's vegetation and species, including the dinosaurs. Scientists have long argued whether the Earth was hit by a comet or an asteroid. Until recently, chemical evidence indicated it was a comet. Now, however, a team consisting of two Czech and one US scientist has come up with new facts.

The trace of the collision called Tertiary Mass Extinction can be still seen today at the Yucatan peninsula in Mexico. It is a huge crater with a diameter of about 180 kilometres. Not long ago, a team of three scientists, including David Vokrouhlicky of the Astronomical Institute of Charles University, collected some sediment samples at the site of the clash and made some interesting discoveries.

"The basis of our work was the discovery of a new asteroid family - a group of asteroids that share roughly the same orbit around the Sun and have about the same mineralogy of their surface which points to their common origin in a break-up of a larger asteroid, that was hit by another asteroid and got disrupted into pieces. What we observe now are fragments of this larger precursor."

"The Baptistina family is special in terms of its location in what we call the main asteroid belt, its age and the size of its precursor. The special thing about the conjunction of the three things related to the Baptistina family is that it is located in the inner part of the main belt of asteroids. It is much easier to transfer asteroids from the inner part into planet crossing orbits than from the outer part. So Baptistina is sort of strategically located to provide fragments into orbits, which cross the orbits of the Terrestrial planets: Mars, Earth, Venus and Mercury."

According to the scientists, about twenty percent of the asteroids circulating close to the Earth today can be traced back to the Baptistina family. 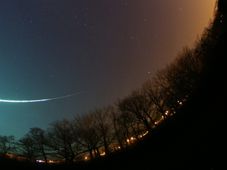 The Astronomical Institute of the Czech Republic has asked members of the public for help in looking for parts of a meteor, classified… 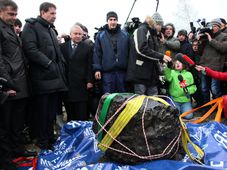 Scientists from the Czech Astronomical Institute believe they have found the origin of the Chelyabinsk meteor that hit Russia in February.… Could the Czech basin have been created through meteoritic impact?

This week the Czech newsmagazine Tyden reported on a theory that the so-called Czech basin, or massif, which makes up most of Bohemia,…