Just two months after a strict smoking ban came into effect in pubs and restaurants around the Czech Republic smokers are getting acquainted with a novel product on the market –heat-not-burn tobacco products which are said to be less detrimental to health and which might allow them to “smoke” in public places once again. The Czech authorities have yet to set the norms for these products which are something between a classic and electronic cigarette. 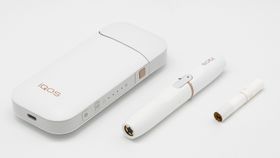 HNB cigarette, photo: SimonDes / Philip Morris International, CC BY-SA 4.0 A heat-not-burn tobacco product (known widely as HNB) employs heating, rather than burning, of tobacco generating an aerosol that contains nicotine. Manufacturers claim that unlike their combustible counterparts, HNB cigarettes are less detrimental to health while delivering the required doze of nicotine to a user. A tobacco stick along with a heating element will provide the user with a choice across the different heat-not-burn tobacco products available. Klára Jirovcová Pospíšilová from Philip Morris explains the benefits:

“What is important is that the tobacco does not burn –it is merely heated to 300 degrees Celsius which means that there is no smoke and no ash, and you cannot smell it as much as normal cigarettes.”

HNBs first appeared on the market in 1988, but they were not a commercial success. At the time they were no match for the classic cigarette, but with tough anti-smoking laws in force around Europe tobacco companies are hoping HNBs will see new opportunities opening up. Some countries in Europe such as Poland, Hungary and Spain -have already issued a tough ban on HNBs, putting them on par with regular cigarettes, but others like the Czech Republic have yet to lay down the rules for these products. The Czech Health Ministry claims that the anti-smoking ban should apply to HNBs as well, but others claim that under Czech law they would fall in the same category as electronic cigarettes which are not banned in pubs and restaurants.