Long distance swimmer Yvetta Hlavacova who set a new Czech record for swimming the English channel in 8 hours and 42 minutes last year has big plans for the future - she wants to swim there and back, challenging the twenty three year old record set by Dutch swimmer Irene Vanderlan who covered the 66 kilometre distance in 18 hours and 15 minutes. Even if she fails to break that record it would be a huge achievement - Hlavacova would become the third European woman to have swum across the channel there and back.

Yvetta Hlavacova Yvetta Hlavacova has made her mark in the world already. Not just by setting a new Czech Record swimming across the English channel. The blonde Czech swimmer is in the Guinness Book of Records for having the longest legs in the world - 1m 26 cms. But she's aiming higher and she says that even as she swam the channel last year she knew she had it in her to do more:

"The thought first occurred to me when I was swimming across the channel last year. I felt I might have the strength to do it both ways and by the time I left for home I knew I'd be coming back for more."

English channel Yvetta is now training with the Spanish champion in long distance swimming David Meca, swimming five hours a day. She says that coming from a landlocked country is a major setback because she needs to travel a lot to train in the sea. That means being away from home but - she's set her sights on breaking the world record and she told Radio Prague no amount of difficulties or pain were going to stop her getting there.

"It is very hard to stay focussed for 20 hours. When you feel like you've reached your limit your mind just goes blank and sheer perseverance drives you on. There's pain of course but I have a high pain threshold and there's a big reward waiting at the end of it. For me it is worth it and if it benefits the Czech Republic then I' m proud to do it."

Ivetta will attempt the two-way crossing in August of this year. 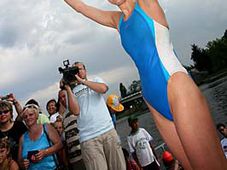 On Saturday 32-year-old long-distance swimmer Yvetta Hlaváčová completed the last leg of a 142 kilometre swim up the Vltava River,…