Czech long-distance swimmer David Čech has succeeded in swimming the Strait of Gibraltar both ways, becoming the fifth person in the world and the first Czech to do so. He also managed to cross the first half of his journey, from Spain to Morocco, in the record time of 2 hours and 38 minutes. I asked David Čech to tell me all about it: David Čech, photo: CTK “I started at Tarifa in Spain at 10.15 in the morning on 19 August and I swam to the other side, to Morocco. The first way took 2 hours and 45 minutes, which is a new world record. Then I swam back to Spain, but the weather was worse than before, so I finished after 8 hours 48 minutes. So the second way took me 60 hours and 11 minutes.”

Were there any other reasons why it took you longer?

“I think it’s because of the strong currents from the Atlantic Ocean, where the water is colder than in the Mediterranean Sea.”

Were there any other dangers apart from the currents?

“Big boats and some animals, such as sharks and whales.”

You are one of the 16 people who managed to swim the English Channel in both directions. Can you compare the two experiences? 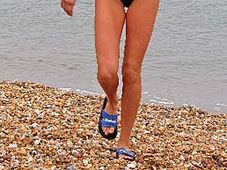 Last weekend was a momentous one for Czech long-distance swimming: Yvetta Hlavacova set a new women's world record for swimming the…