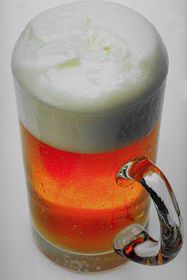 More than half of the 16-year-olds polled admitted that they had got seriously drunk one or more times in the past year, and half of the boys said that they consumed alcoholic beverages - mostly beer and wine - on a regular basis.

Although the law does not allow alcohol to be sold or served to anyone under 18, it is rarely implemented and it is not unusual to see a group of 16-year-olds drinking beer at the pub without anyone paying them any attention. Are today's youngsters drinking more than their parents did or is this more or less a "normal" part of growing up? A question earlier for Dr. Ivan Douda, who spent five years working at a rehab centre for alcoholics.

"As I see it, experimenting with alcohol and even soft drugs is a normal part of growing up. During adolescence - usually between the ages of 13 and 16 - young people need to experiment with whatever is available - drinks, cigarettes, soft drugs. The process of maturing involves experimenting with one's body, violating existing norms and being different from the preceding generation.

"The statistics we now have at our disposal look alarming, but one must keep in mind that as regards past generations, statistics were either much less accurate or non-existent. There is a persistent myth that the younger generation is worse than the one before it, but it pretty much follows the same pattern."

The debate which this survey has sparked has divided experts into two camps. Those who take a liberal attitude and say that repression is no good and that youngsters will always try forbidden fruits, and those who advocate tighter laws and a higher price for alcohol to keep children away from something that could seriously impair their health. Ivan Douda holds the following view:

"If - and I emphasize the IF - it is true that today's youngsters are drinking more than we did, then we must ask ourselves what is the cause of this. What it is that they lack and what we could offer them instead? Bans and repression are a sign of desperation, a sign of our own inability to deal with the matter in a positive way. Besides, bans have never worked well in Europe, people always find a way around them. What we need is to give children more information, to show them that consumed in a certain measure alcohol is one of the pleasures of life - but that excessive drinking will, in the end, rob them of a great deal else in life which they could otherwise enjoy."

If experimenting with alcohol is a normal part of growing up - all well and good. But there is one piece of information which is cause for concern. According to a US study, 40 percent of people who start drinking at an early age have serious problems with alcohol later in life. I asked Dr. Douda whether he would agree with this.

"I think that is absolute nonsense. We have serious studies that document the fact that in our culture - let us say in "the Western world" only around 4 percent of people who drink acquire a dependence and turn into alcoholics. In places such as Russia or Ukraine, where the population is known to drink heavily on a regular basis, the number of alcoholics is higher. But in our environment, an estimated 4 percent of the population are alcoholics. What IS true , on the other hand, is that teenagers can acquire a dependency more quickly. An adult can work on becoming an alcoholic for 10 years. Someone under 20 can become one in one to two years. But the number of youngsters who do so is minimal. What we see in the young is excesses - and of course they are more marked. A teenager rolling drunk in the street will create a much worse impression than an adult in similar circumstances."