One of the legends of Czech sport, tennis player Radek Štěpánek, has finally announced that he is hanging up his tennis racket as a competitive player. But other roles in the game could still be beckoning for the two times Davis Cup winner. 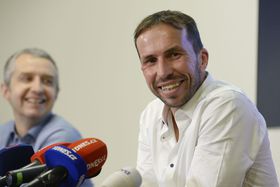 Radek Štěpánek, photo: CTK Radek Štěpánek is said as a young boy to have dreamt of winning tennis’ top men’s competition, the Davis Cup, for his country. And in reality he helped make it happen not once but twice, against Spain in 2012 and against Serbia a year later in 2013.

And in Czech memories it will always be Štěpánek who will be chiefly remembered for those wins as he clinched the key points in both finals that brought the Salad Bowl home. But, the memories should also include the frequent doubles duels alongside Tomáš Berdych where the Czech team picked up so many points and became formidable foes.

As through much of his injury interrupted career, 38-year-old Štěpánek admitted that it was health concerns that had finally prompted his to call it a day. He has been trying to recover from a back injury and surgery since the Spring of this year. And up to a few weeks ago, the player had still been considering a comeback in 2018. He explained his decision at a press conference in Prague on Tuesday.

"I realised that I didn’t want to risk my health for the further stages of my life to come. I have to be realistic about what my body can and can no longer do. I can no longer push it to the limits, which I have done for a long time. "

It is probably on the doubles court that Štěpánek’s career peaked with Grand Slam triumphs at the 2012 Australian Open and 2013 US Open, both times alongside Indian doubles specialist Leander Paes. And in the mixed doubles at the Rio Olympic in 2016 he picked up a bronze medal for the Czechs in the mixed doubles competition. 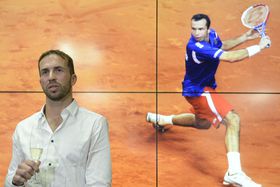 Radek Štěpánek, photo: CTK But the Czech player’s dogged approach and deft touches brought him success in singles as well. He achieved a career best ranking of eighth on the ATP singles ladder in 2006. That was the year he battled to the Wimbledon quarterfinals. In all, Štěpánek landed five ATP singles titles. And even last year in the French Open, the Czech proved he could still match the best by putting the then number one, Andy Murray, through a gruelling five sets and coming close to a shock first round win.

Off court as well, Štěpánek was a colourful, if sometimes controversial, character and was also an enthusiastic fan of the Czech women’s game as well.

As for his future, Štěpánek says he will time to reflect on that but could look at being a tennis trainer or travelling away from the gruelling routine of the top tennis circuit.

"I really like to travel and I hope that travelling will be part of my future life. I don’t see any real difference if that travelling is linked to work as a trainer as just travelling as an ordinary tourist with a backpack."