Late into Monday hundreds of Czechs tourists - including many children - were among those at risk at a resort on Greece's Chalkidiki peninsula where a forest fire broke out following days of intense heat and an extensive dry spell. Strong winds fanning the flames soon saw the fire spread along a nine kilometre area leading to some panic and hasty evacuations. 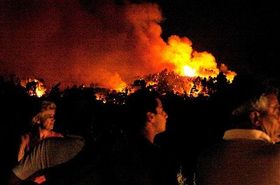 Photo: CTK For organisers in the tourism business the idea of a forest fire breaking out and threatening tourist areas is a nightmare indeed. On Monday, flames near resorts on the Greek peninsula of Chalkidiki, forced local authorities to take action - and begin evacuations. Czech tourists - including ninety children and their adult tour councillors - were among those who had to leave their hotel rooms, leaving most possessions behind. No Czech suffered injury, although elsewhere at some resorts people were injured: and there are reports a German national drowned. The head of the Evroskol travel agency, Marek Vizek, explains how the situation developed at the "Czech children's" site: 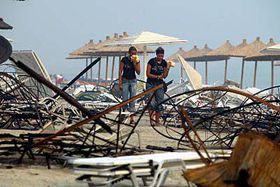 Photo: CTK"We got the news yesterday, when we were informed by our delegate that evacuations were underway. These were in line with instructions from local authorities and the military, meaning everyone had to leave their hotels and living quarters, although they did have enough time to grab essentials before heading for the beach. It was lucky that you could always see the fire some 250 to 300 metres away from the beach, so any change would have observable. The situation was being monitored and the Czech consul arrived at the scene at around 11 pm and there were some attempts to secure boats to move everyone to another site, but in the end it was unnecessary. The smoke tapered off. Councillors were able to get things for the children like lawn chairs and covers and that's where they slept and that's how they spent the night."

A number of buildings including a supermarket and one vehicle reportedly did succumb to flames, but tourists - including the children were in relative safety on the beach. All the same, not surprisingly, there was great concern back home. Once again, Marek Vizek: 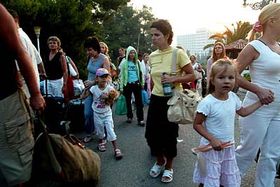 Photo: CTK"At first there were some panicky reactions and of course the phones [rang off the hook]. We continually tried to explain the situation. By that point the area was hermetically sealed off, so even if we could have met some demands to 'immediately' evacuate further, at that point it was up to the local authorities. We explained developments in calls throughout the night and by morning the situation had calmed. That's not the end of the story of course: there have been major damages to [local infrastructure]: there is no running water, no electricity, no working plumbing at the site. And, nearby, everything was burnt."

According to Marek Vizek of the Evroskol travel agency, a decision is to return the children home as soon as possible is imminent, and for that purpose three busses are standing by.

The reconstruction of Libušín, a historical chalet in the Beskydy Mountains in the east of the country, has been finally completed.…

Replica of historic Czech wooden church rises from the ashes

The wooden Corpus Christi church in the village of Třinec-Guty, nestled in the Cieszyn Silesia region that today borders Poland, stood…