Cambodian police have confirmed the arrest of a Czech woman on suspicion of dealing in the drug ecstasy. The woman, who is understood to have pled guilty to the charges, now faces a hefty prison sentence. 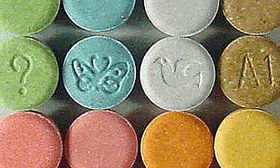 Ecstasy tablets, photo: Public Domain According to police in the coastal city and province of Sihanoukville, a group of three foreigners were arrested outside a local restaurant last Saturday. Two additional accomplices were then taken into custody the following day. The group comprised of a Ukrainian man, Finnish woman, Czech woman, Belarus-born American man and Russian woman.

Police say they began an investigation into alleged drug dealing in the area ten days prior after a tip-off from the landlord of the American suspect, who is the alleged ringleader of the group. Authorities say this suspect later confessed to using a rented apartment as a lab to produce MDMA, or ecstasy. Police say they found 900 tablets of ecstasy along with further materials used for narcotic production. The estimated street value of the drugs is USD 18,000.

Irena Valentová is a spokesperson for the Czech Foreign Ministry. I asked her about the potential punishment faced by the Czech citizen for her apparent role in a drug distribution gang:

“According to the information provided to us by the Cambodian police, she can receive a prison sentence from 2-5 years in length. Right now, she is in custody, and the investigation is ongoing. That process may take several months.”

As is typical in such cases, the foreign ministry declined to confirm the specific identity of the Czech woman in question. But Valentová confirmed that the Czech Republic was in touch with local authorities, both via local representatives in the Cambodian capital Phnom Penh, and also via the nearby Czech embassy in Bangkok, Thailand.

“According to the information we have, she confessed to the crime. But as I said, the investigation is ongoing, and no date has yet been set for a court hearing.”

Cambodia is a major global centre for ecstasy production. Sassafras oil, a key ingredient in the drug, is made in illegal factories in Cambodia’s rainforests. Authorities – engaged in active battles against such factories since 2004 – say the drugs trade is contributing towards a decimation of the natural environment.

Young Czechs remain at the top of the European ladder in the use of soft or party drugs, with marihuana being the most commonly used…