One of the biggest events in women’s tennis, the WTA Finals, got underway in Singapore on Sunday. Although Czech competitors got off to a losing start, many, including the Martina Navrátilová herself, say the fact that four players from the Czech Republic made it to the finals – is a positive sign for Czech tennis.

Martina Navrátilová, photo: Michal Pohorelsky, CC BY 3.0 Unported It’s not every day that four Czechs take part in the prestigious WTA finals, two in the singles and two in the doubles. Petra Kvitová and Lucie Šafářová are taking part in the singles and Šafářová is also taking part in the latter with Bethanie Mattek-Sands. Czech-born tennis legend Martina Navratilová, after arriving in Singapore, told Czech Radio that Czech ladies’ tennis had plenty to be proud of.

“It’s unbelievable. Czech tennis is in great shape. [On the men’s side], poor Berdych is on his own. But on the women’s, the girls are playing great tennis and I am proud of them… Back in my day, there was Hana Mandlíková, Hana Suková and then Jana Novotná – all players who had the chance to win or won a grand slam title.”

It is an excellent calling card for the Czech Republic and Czechoslovakia before it, to have so many quality tennis players; Navratilova again.

“When you consider that the Czech Republic has 10 million people or Czechoslovakia had 13 or 14 million, it’s amazing how much great tennis we produced. Martina Hingis plays for Switzerland but has Czech or Slovak roots: if you look back in history there was no period when there wasn’t some Czech who was winning.”

Navrátilová, a legend, was an inspiration for many who are playing now. When she was growing up, she had players of her own to look up to. 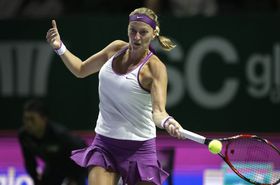 Petra Kvitová, photo: CTK “For me there was Jan Kodeš, I saw him play, and I heard a lot from my father about Jaroslav Drobný although I never saw him play. The history of Czech tennis… there was Věra Suková, Karel Koželuh, the tradition was there, I just continued it.”

So far, the WTA Finals haven’t gone quite the Czech women’s way but there is still room to rebound in the round robin. In November, the women’s tennis team will defend the Fed Cup title from last year, facing Russia. Navratilová will not be in Prague to see the final but has expressed every confidence the Czechs will persevere against their opponents.