Czechoslovak paratrooper Jaroslav Klemeš dies at the age of 95

Brigadier General Jaroslav Klemeš, the last Czechoslovak paratrooper flown into the Protectorate during World War II, has died. Defence Minister Martin Stropnický confirmed the news in a tweet on Monday, offering his condolences to the family. 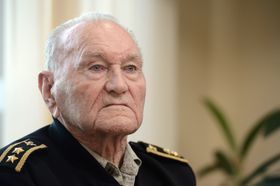 Jaroslav Klemeš, photo: CTK Jaroslav Klemeš was born to Czech parents in Slovakia in 1922. The family moved to Moravia after the declaration of the Nazi-recognised Slovak state in 1939, and a year later Klemeš decided to leave his native country, too.

He first escaped to Hungary, and then traversed a route through Yugoslavia, Turkey and Syria before eventually ending up in France, where he ended up serving as a signalling officer in the Czechoslovak army for Edvard Beneš’s government-in-exile.

When the Germans occupied France, Klemeš followed the Czechoslovak government to Great Britain. There, he underwent intensive training as a paratrooper, before being assigned to a mission codenamed Operation Platinum-Pewter. It took three attempts, but in February 1945 he joined three other soldiers in a daring mission flown in behind enemy lines. Klemeš was a radio operator for the mission; the group landed near the town of Chrudim in eastern Bohemia and were tasked with gathering intelligence and setting up a radio communication channel back to Britain.

Speaking to the Memory of Nations project Klemeš recalled a moment of drama during the night drop:

“A dog started barking, then a second one joined in, and a third. It was always completely calm by the forest…and now such a racket, it was clear that something was going on out there. Windows lit up and people started peering out to see what was going on... Then we found our man and he didn’t let us in, he was scared, we tried the password, but he said to come in the morning. He was afraid that the people looking out from the houses would see some people by his place, and so he was scared to let us in and we couldn’t wait there, so we went away.” 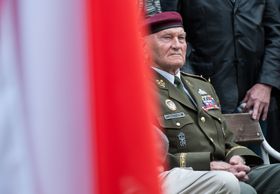 Jaroslav Klemeš, photo: CTK Later, Klemeš travelled to Prague, maintaining covert communications with both London and the emerging Russian-backed Košice government in Slovakia. He also participated in the Prague Uprising in May 1945, using a radio transmitter called “Anna” to relay information back to London. After the war, initial promotions and decorations, such as the Czechoslovak War Cross, made way to persecution by the communist regime after it came to power in 1948. Two years later, Klemeš was expelled from the army by a regime inherently suspicious of anyone who had fostered contacts with the west. Demotion, months of interrogations, and a two-year prison term on trumped-up charges followed. After being released, the regime forced Klemeš to work as a manual labourer in the northern Bohemian town of Ústí nad Labem.

Years later, speaking to the Memory of Nations project, Klemeš recalled these attempts by the communists to humiliate him:

“I thought they would dismiss us from the army; it was obvious this was going to happen, that they would say he does not fit into our politics anymore. I never imagined they would imprison us, that they would try to humiliate us at all costs, to lock us up and to liquidate us.”

Partial rehabilitation came for Klemeš in 1968 amidst the liberal climate prior to the Soviet-invasion that summer. After the fall of the communist regime, Jaroslav Klemeš was promoted to brigadier general. In 2016 he was awarded the highest order of the Czech Republic, the White Lion. Klemeš passed away in the Military University Hospital, Prague after a long illness.