One hundred years ago this autumn, Tomáš Garrigue Masaryk stood atop the stairs of Independence Hall in Philadelphia – where both the American Declaration of Independence and the US Constitution were adopted – to proclaim the creation of a new sovereign state, Czechoslovakia. But the seeds of liberty first took firm root in the spring of 1918 with the May 31st signing of the “Pittsburgh Agreement”, a memorandum of understanding between the Czech and Slovak immigrant communities to create an independent republic. 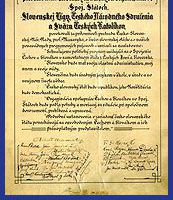 Pittsburgh Agreement It was perhaps an unlikely setting for such a seminal event – the Loyal Order of Moose Lodge in Pittsburgh, a rough and tumble industrial sprawl at the confluences of three rivers, known as “Steel City”. But it was in that fraternal order’s humble two-storey building that leaders of Czech and Slovak immigrant communities in America came together in a bid to help create an free, independent Czecho-slovak state.

Milada Polišenská, a professor of history and international relations at Anglo-American University in Prague, will be among the panellists speaking at a symposium in “Steel City” this week to mark the 100th anniversary of the “Pittsburgh Agreement”. She says the significance of that memorandum – and the crucial role of Czech and Slovak immigrants in supporting Masaryk’s wider diplomatic efforts – is sometimes not given its due.

“Every study about the recognition of Czechoslovakia mentions this, but still I think the recognition should go even deeper. It was huge. The Czech community in the United States, and also Slovak of course, collected for example a huge amount of money – and those people were not rich!

Why did they leave the Czech lands? Why did they leave Slovakia? Because they were looking for better living conditions. So, those people who came across the Atlantic, they were usually very poor. But they were able to donate money which really helped enormously in the struggle for independence… Masaryk, without the help of his American friends and supporters, but also without these emigrant circles, would have had a very, very limited chance to succeed.”

Before arriving in the US, Masaryk had travelled abroad widely – from Moscow to Vladivostok, from Tokyo to Vancouver – seeking committed support for his dream of an independent homeland. In particular, though, he sought support from American president Woodrow Wilson, who in his famous “Fourteen Points” of January 1918 had demanded the nationalities of the rapidly disintegrating Austro-Hungarian Empire enjoy the “freest opportunity to autonomous development”. 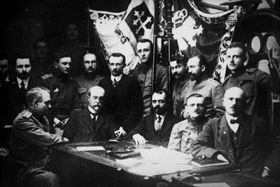 Pittsburgh Agreement The political unity expressed by the “Pittsburgh Agreement” – which would in time be signed by 29 leaders of national Czech and Slovak fraternal, religious and cultural organizations, representing the hundreds of thousands of émigrés – or krajané – from Bohemia, Moravia, Slovakia, and Silesia – proved instrumental in helping Masaryk achieve his goal. On 26 October 1918, from the steps of Independence Hall in Philadelphia, Masaryk called for independence not only for Czech and Slovaks but for all oppressed peoples of Central Europe.