At the start of the tournament some may have questioned the Czechs' ability to overcome some very big teams at this year's Ice Hockey World Championship but they did it and cast aside all doubt. After edging the U.S. in penalty shots and eliminating last year's runner-up Sweden in extra time, the Czechs faced Canada in the final on Sunday and came out on top. Jan Velinger has more on an unforgettable game. 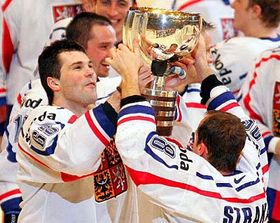 Jagr and fellow players celebrate, photo: CTK Sunday, May 15th, 2005 will go down as a glorious date in Czech hockey history, a return to Vienna where the Czechs first struck gold ten years ago. Now, as they did then, the Czechs triumphed over Canada this time with 3 goals, the last a cross-rink shot by Josef Vasicek that found the back of Martin Brodeur's deserted net.

It was a crowning moment and a return of Czech hockey to the top of the world scene. Czech team coach Vladimir Ruzicka was thrilled:

"I'm really happy we pulled it off, I think it'll only begin sinking in tomorrow. It was all so fast! I'm really happy. Czech hockey needed a win and the boys did it. In the next few years I hope we continue to finish in the medals because that's where Czech hockey belongs." Brodeur blocks the near post, photo: CTK Throughout the tournament the Czechs never had it easy. All of the elimination games leading up to the final were agonisingly close, and many expected a similar finish here, too. Throughout the match Canada's top guns Thornton, Heatley, Smyth, & Nash, were not without their chances. But, a flawless Tomas Vokoun denied them all.

Team captain Ryan Smyth - who triumphed with Team Canada last year in Prague - took this year's loss less than graciously, involved in several scuffles towards the end of the game. After the match he could not hide his disappointment:

"Any time you lose in the final game it's frustrating, it's really disappointing. We wanted to represent our country with pride and we fell short. And, you know, 2nd place isn't good enough." 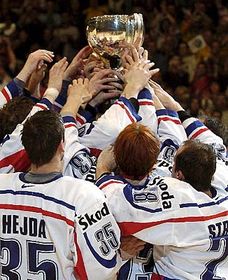 Photo: CTK But, as long as the Czechs could produce such well-timed bullets as Rucinsky's shot at the start of the 3rd, 2nd place will have to be good enough.

"A nice pass by Jagr across to Rucinsky...goooaaaal! Rucinsky blasts it past Brodeur!"

"If we look back in the past whenever we had strong defence and strong goaltenders we always won or placed close to the top. Hat's off to the guys for what they managed: if you look at the final scores it was never an easy tournament, a lot of close games from the first game to the last. It really wasn't easy."

And here's what Canadian Joe Thornton had to say: Jaromir Jagr, photo: CTK "They played well all night, they obviously capitalised on their scoring chances. We were right there a couple times but just couldn't tap it in. But, you know, the boys left a lot of heart on the ice and that's all we expect of each other. We had a great tournament. We just came up a bit short in the last game."

Canada defeated means that the Czechs have earned their fifth world title in ten years. Star forward Jaromir Jagr becomes one of few in the select group to win each of the three major championships: the Olympics, the Stanley Cup, and now the world title. But, he knows the game could have easily been closer.

"Every time we beat Canada it's a big thing. They've got probably the best players in the world and can easily put together 5 or 6 teams who can compete with anybody. The last two years they won: this year we had more luck than them!"

At the end of evening the Czech anthem once again played as crowds in public squares around the Czech Republic erupted in celebration. The team can now expect nothing less than a hero's welcome on the return home.