As much as the Czech national hockey team would like to be firing on all cylinders at the World Championships in Minsk, the bottom line is that the squad has been less than convincing. On Tuesday, Jágr and co. faced France, the Cinderella story of the tournament, and only just came out ahead, edging the French 5-4 in overtime. 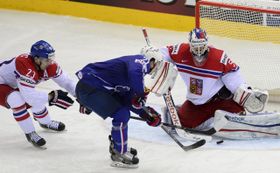 Czech Republic - France, photo: CTK If the Czech squad captained by Tomáš Rolínek and buoyed by players like Jaromír Jágr and Tomáš Hertl wanted to get off to a good start against France on Tuesday the first period of the match was anything but. There were plenty of goals, certainly, but out of four, three found the back of the Czech net.

As downcast goalie Alexander Salák retrieved the third puck, the Czech squad looked dead on its feet. Still, Vladimír Sobotka, opened the door a sliver when they needed it most: scoring in the last minute of the 1st period, cutting the lead to 3 -1.

“We felt terrible, everyone on the bench was dead. The score of course was bad for us. But we did get one back before the end of the first. In the locker room we agreed we couldn’t continue along those lines: a terrible first period.” 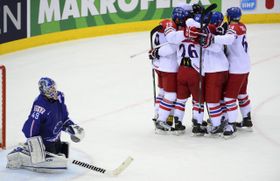 Czech Republic - France, photo: CTK Something must have clicked: over the next 20 minutes in the 2nd the Czechs were a transformed team and by the 3rd period they had fought their way back to take a 4:3 lead. Even when the French tied it, sending the game into overtime, the Czechs, through Jan Kolář, got the winner three minutes in.

The Czechs could breathe a sigh of relief. Although they would have qualified for the knockout stages regardless, the team managed to dodge a bullet by avoiding a powerhouse Russia in the quarterfinals. Instead, they will play the United States, at least on paper a preferred opponent.

Still, Tuesday’s game left Czech coach Vladimír Růžička far from happy: he has criticised the team’s play throughout and for good reason: the team has taken needless penalties, fallen behind early, and often failed to convert. On Tuesday, shortly after the match ended, he said this:

“If this is how we are going to play there is no chance we get further in the tournament… We can’t expect Salák to get the shutout every time… It is about what players are doing on the ice. It is about players doing everything agreed. In the last three minutes we saw Rolínek dive headfirst to block a shot. That is the kind of performance we need.” 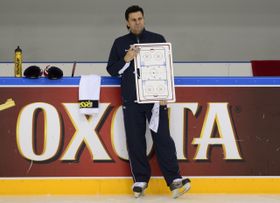 Vladimír Růžička, photo: CTK At the other end, the French team, which had played with enormous confidence and ease, rued the lost opportunity; like the Czechs the squad had wanted to avoid Russia if possible a meeting that is now in the cards. Vladimír Růžička, on the other hand, suggested it didn’t matter who the Czechs faced in the next round, shrugging aside any preference. The US may not be quite as daunting as Russia, but it is lost on no one that the last time the United States and the Czech Republic met– in the quarterfinals at the Winter Olympics – it was the Czechs who were defeated. 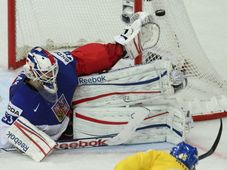 In Sports News this Monday: Czechs finish outside medals at Ice Hockey World Championship in Belarus after failing to score in final… 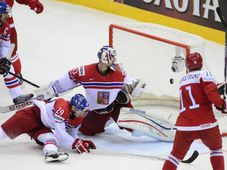 In Sports News this Monday: Czechs flounder at ice hockey Worlds with first ever loss to Denmark – Jágr calls for more teamwork; Sparta… In Sports News this Monday: the Czech national hockey team gets mixed results in first matches at worlds; will this year’s worlds be…