All eyes will be on Prague’s O2 Arena this weekend, when the Czech Republic take on Spain in the final of tennis’s Davis Cup. The last time the Czechs – as part of Czechoslovakia – won the prestigious title was back in 1980, and victory would be the crowning achievement of Tomáš Berdych, Radek Štěpánek and their teammates. 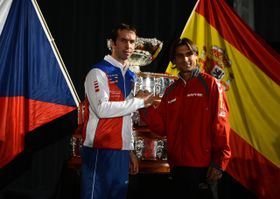 Spain beat the Czechs 5:0 when they met on a clay court in Barcelona in the 2009 Davis Cup final, and victory would give them their fourth title in five years.

However, this time the Spaniards will be without their biggest star, Rafal Nadal, with the former world number one currently out injured. Journalist Jan Janoch from the newspaper Sport says that’s good news for the Czechs:

“It’s a huge, huge advantage. But with the shape that David Ferrer is in right now…he won his last two tournaments and played great matches at the Masters Tournament in London. So I think he can substitute for Rafa and be their big leader, like Rafa was in Barcelona.” 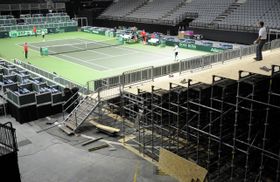 Photo: CTK One talking point ahead of the weekend’s clash has been the playing surface, with the home team opting to play on a super-fast synthetic hard court. That should benefit their players, such as the big-serving Tomáš Berdych, who had this to say:

“The court is well prepared. It’s what we want, what our team wants, what we think is going to be best for us. The surface is faster than regular tournaments in the season. But that’s the Davis Cup and we have the advantage to choose the surface, and that’s why we’ve chosen this one.”

Among those in attendance this weekend will be the four members of the Czechoslovak team that were the country’s last winners of the Davis Cup in 1980: Tomáš Šmíd, Pavel Složil, Jan Kodeš and Ivan Lendl. Lendl – back in the spotlight since he started coaching Andy Murray – also welcomes the hard surface: 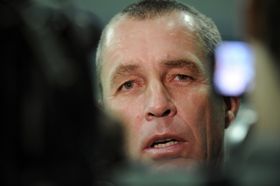 Just two weeks ago at Prague’s O2 Arena there were scenes of joy as the Czech women took their second Fed Cup title in a row with victory over Serbia. At a news conference, Radek Štěpánek was asked if he and the rest of the men’s team would be taking inspiration from the ladies:

“Before it happened with the Fed Cup, I hope that we were an inspiration for them already in 2009 [by getting to the final]. The fact that the girls did it twice in a row is a great result, and hopefully we’re going to be a country that again wins the double in one year. Definitely our fans are in a winning mood and we hope we can leave this arena in the same way.” 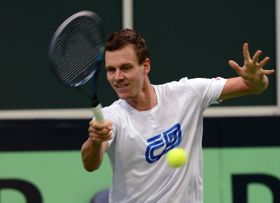 Tomáš Berdych, photo: CTK Indeed, the last time any country secured Fed Cup and Davis Cup titles in the same year was in 1990. The Czech Republic have never done it. Jan Janoch says this means success for the Czech men this weekend would be huge: