The month of July, 1997 brought devastating floods to Central Europe. The flooding began in the Czech Republic, then spread to Poland and Germany taking the lives of close to 100 people, destroying towns and infrastructure and leaving thousands of people displaced. 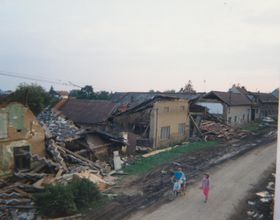 Troubky after the floods in 1997, photo: Ladislav Svoboda, CC BY 3.0 The worst floods of the 20th century, also referred to as the Millennium floods, came at the start of July after days of torrential rain. Flooding began on July 5 in the Czech Republic hitting predominantly the eastern parts of the country where rapid flash floods drove water levels up by several meters in half a day. In the course of the next ten days a third of the country was affected, with 536 villages flooded and 80,000 people evacuated. 50 people lost their lives and thousands were left homeless. Over 2,000 homes were destroyed, 48 bridges were damaged and 500 km of roads were underwater. The village of Troubky, which became a symbol of the floods lost nine of its inhabitants and was completely destroyed. Jana Netopilova says the events of the terrible day will remain forever fresh in her mind.

“We waded through the debris of our flooded home to the lifeboat. My husband was clutching our eleven-day-old baby girl in his arms and I was holding our four-year-old daughter. We were swept to safety at the eleventh hour. When we were up in the helicopter I looked down to see our house engulfed in the murky water – just tops of trees, debris and the raging water that was all that was left.”

Today many of the 150 houses that were destroyed have been reconstructed. Other sites remain empty – a reminder of the worst natural disaster in the history of the village. And the fear of flooding is still strong. Since then Troubky has been flooded twice, though with lesser damages and no loss of life. However the location of the village spells possible future problems. Plans for an anti-flood barrier – a rampart of sorts that would hold back the flood water hit the rocks after the owners of the private property where it was to stand refused to give permission. The town went ahead with it anyway preferring to pay a fine or compensation rather than remain unprotected. 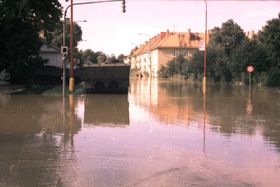 Uherské Hradiště, 1997, photo: Bohumil Blahuš, CC BY-SA 3.0 Since 1997 – and also in view of the devastating floods in 2002- the government has spent millions of crowns on flood prevention around the country, erecting barriers and broadening river basins where needed. In Prague mobile barriers would be put up along the Vltava embankment in the high risk areas and water-proof doors have been installed in the Prague Metro to protect those metro stations that were flooded in the past. However work on anti-flood measures is far from complete and environment expert Ivo Machar says the effort does not go far enough since the authorities have stopped short of preventing people from building houses in high-risk areas.

“There is no flood map on the grounds of which people would be banned from building houses in the extreme-danger zones. Or else there are efforts to map these areas but people go ahead and settle there anyway.”

Machar and others warn that given the climate changes we have witnessed in recent years and the more frequent flooding this could present a serious problem in the years to come.

The Czech Republic this year witnessed one of the driest summers in its history, and experts predict that heatwaves, as well as other…