Czechs are paying homage to Russian author and Soviet-era dissident Alexander Solzhenitsyn, who died on Sunday. Mr Solzhenitsyn will perhaps best be remembered for opening the eyes of the world to the true brutality of Soviet Russia, but the author is not without his critics. 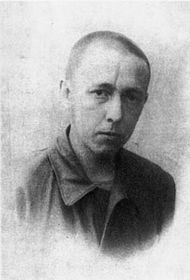 Alexander Solzhenitsyn during his deportation in 1946, photo: CTK Alexander Solzhenitsyn made the world aware of the Gulags, the Soviet prison camps which were used by Josef Stalin to punish those who opposed his absolute rule. Solzhenitsyn’s crime was simple – in 1945, following years of military service fighting against the Nazis, he had written a letter to a friend mocking Stalin. He was arrested, tried and sent to the Gulags. After serving his sentence, Solzhenitsyn was condemned to spending his life as a “non-person” in internal exile. Surprisingly, it was not until 1974, that the novelist was sent into permanent foreign exile – he was sent to West Germany and stripped of his Soviet citizenship. Prior to that time, Solzhenitsyn had only rarely managed to publish his writings. In 1962, he published the largely autobiographical One Day in the Life of Ivan Denisovich with the approval of Soviet leader Nikita Krushcev. But other works proved difficult to get past the censors, and his most famous work The Gulag Archipelago was completed in exile. Alexander Solzhenitsyn ultimately moved to the United States, living for many years in the state of Vermont. After the fall of the Soviet Union, he returned home and continued writing. However, some of his statements caused controversy, and he was accused of harbouring nationalistic views. He strongly opposed the NATO bombing of Serbia in 1999, drawing comparisons between that organization and Hitler. In other writings he supported Russian nationalism and argued that the Soviet Union was not a Russian entity and the country should not be blamed for its crimes. 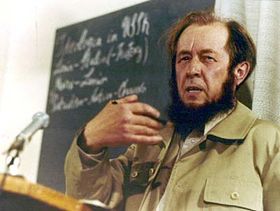 Alexander Solzhenitsyn gives his first news conference in the West since being expelled from Russia, Zurich, 1974, photo: CTK I spoke to political commentator Jan Urban about Alexander Solzhenitsyn’s life and legacy and began by asking him what it was about the Russian writer that made him so notable all around the world:

“He was the first Soviet author who became known in the world for his description of life in Stalin’s labour camps and prison systems. Through him, we all came to know the term ‘Gulag Archipelago’ and also, he definitely was a brilliant writer with a very strong appeal to audiences even outside Russia.”

And he is also credited with waking up various elements in the European intelligentsia that still had romantic notions about Soviet communism... 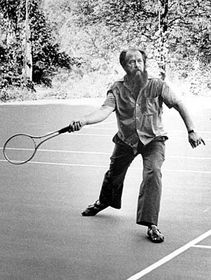 Alexander Solzhenitsyn plays tennis at Norwich University in Northfield, 1975, photo: CTK “His influence over the European left in the 60s and 70s is definitely notable because he was the first very strong and respected voice from within the Soviet Union who appealed to the conscience of the world, so to speak. Those European Euro-communists and leftists with romantic ideas about communism in the Soviet Union lost many of their trump cards after Solzhenitsyn’s books were published and became known in the west.”

There was also a more controversial side, particularly in later life when he was accused of being a pro-Russian nationalist and he compared the NATO bombing of Serbia to the actions of the Nazis. So is it fair to say that it is not so clean cut? 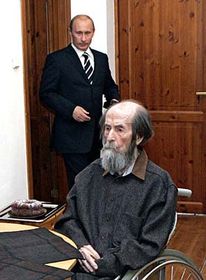 Vladimir Putin, background, visits Alexander Solzhenitsyn, in his house in Troitse-Lykovo in the outskirts of Moscow, 2007, photo: CTK “I think that there were several Solzhenitsyns. Also, it is a story that is often repeated that some of the Russian dissidents who were brilliant at being against communism, but when the situation changed and they were asked what they were for – what positive programme they could bring instead of just being against communism – they came out with nothing and turned back to the nineteenth century style anti-Semitism, ‘great Russia,’ patriotism etc. And it is sad as we are speaking about a former communist prisoner who in his later years accepted awards from the senior KGB officer [now former president and current Prime Minister] Vladimir Putin. So his later years are definitely marked with controversy.”

And how will the author be remembered by Czechs and do Czechs have any personal connection to Solzhenitsyn?

“For Czechs, Solzhenitsyn was an eye-opener. I remember in the 60s, when we read ‘One Day in the Life of Ivan Denisovich’ [first published in 1962, the story describes a day in the life of a prisoner inside a Soviet prison camp] which was immediately translated here. And then we followed his struggles in 1974 when he was deported – and that made him a true hero of dissent and the anti-communist struggle here. His later controversial years will be forgotten.” 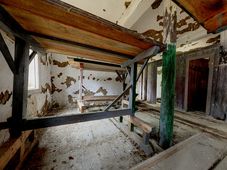 Horror of camps only hits me when I get home to Prague, says Štěpán Černoušek of Gulag.online

Gulag.online is a freshly-launched interactive virtual museum of the infamous Soviet system of labour camps. The unique project comes… 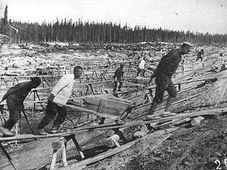