The Chamber of Deputies' decision on Wednesday to send Czech military personnel to Afghanistan is the first time that Czech soldiers have been actively deployed in a combat zone since the 2nd World War. Czech Special Forces will be sending more than 100 troops to aid in the US-led operation "Enduring Freedom".

Czech Special Forces are to be positioned in the treacherous mountain region that straddles the Pakistan-Afghan border, where it is believed terrorist leader Osama Bin Laden has been hiding out. The function of Czech soldiers will be to counter any remaining Taliban and Al-Qaeda terrorist forces, as well as to monitor the movement of people. In total, 127 out of 186 deputies voted in favour of Czech involvement in the operation, while 46 voted against.

The mission will be lead by the Czech Chief of Staff, General Pavel Stefka, and it will cost the state around 150 million Czech Crowns. 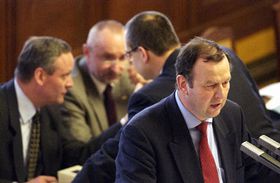 Ministry of Defence Miroslav Kostelka, photo: CTK "About 40 million Czech Crowns will be needed for the transport of troops but the United States will probably cover this amount."

US Deputy Defence Secretary Lisa Bronson spoke to journalists in Prague on Wednesday:

"It is a decision that must weigh a number of factors. We certainly welcome Czech participation as part of the NATO force in Afghanistan. Each individual country that is a member of the alliance has to make decisions based upon resources and based upon other commitments."

Czech Radio visited the Czech Special Forces base in Prostejov, where training was underway. One of the soldiers of the unit going to Afghanistan discussed some crucial elements in preparation for combat.

"We learn how to behave, how to communicate verbally and non-verbally, how not to communicate with people, how to increase one's chances of survival, and how to prevent information leaks that could harm others."

Around 108 reconnaissance specialists are set to join Operation Enduring Freedom, while another 30 soldiers will participate in NATO's ISAF operation in Kabul.

The decision to send troops to Afghanistan, approved by the Senate last month, is certainly a significant decision by Parliament - it is worth noting that the ruling coalition needed opposition support to push the proposal through. How Czech Special Forces, who receive additional training from the British SAS, will fare in Afghanistan is a question that now preys on many peoples' minds - as the operation could see Czechs taking part in active combat for the first time in over 50 years.