Demonstrators gathered outside of two government ministries on Tuesday to protest against government reforms and austerity measures. The all-day happening (which included outdoor concerts, theatre and public debate) was organised by student activists and union reps behind the Stop the Government movement. Already the event, the first of five planned over the next two weeks, has drawn criticism from the prime minister. 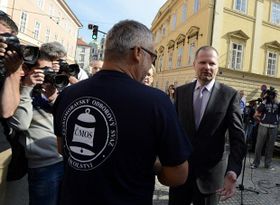 Petr Fiala (right), photo: CTK Turmoil in the government may have dropped in recent weeks, but activists strongly opposed to its reforms and belt-tightening measures aren’t about to ease up adding pressure. On Tuesday, the Stop the Government movement launched its version of an-all day ‘blockade’ at two government ministries, Education and Culture, with live music preceding protests, debate and discussions. In truth, the event was less a blockade than a protest, one organisers coined a ‘tristening’ – a play on the word ‘happening’ and the Czech word ‘tristní’ for sad. Lukáš Matoška is one of the organisers representing a student initiative, who says this:

“Today we can see extraordinary cooperation between several unions active in education and culture, together with student initiatives: we are protesting primarily against planned cuts at both the Education and Culture Ministries. We feel the two are closely tied. Above all today, we will be criticising further cuts which would be devastating.” 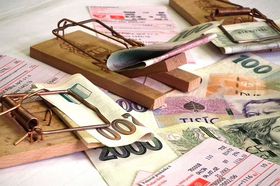 Students are particularly concerned that Education Minister Petr Fiala, appointed earlier this month, will continue in plans laid out by his controversial predecessor Josef Dobeš, namely the introduction of tuition fees and new cooperation by the private sector, which many charge would threaten the independence of the higher education system. Organisers like Lukáš Matoška say those proposals were unacceptable before and are unacceptable still:

“The two most contentious points we criticised the most, tuition and the private sector role, remain on the table... We also think above all that the policy of austerity measures needs to be rethought. Cuts in and of themselves won’t solve the country’s debt problem. It could be just the opposite: they can deepen the debt. And cuts in and off themselves won’t kick-start the economy.”

Prime Minister Petr Nečas has repeatedly said the government is willing to discuss its reforms on the tripartite level (now rejected by union representatives) and he made clear he was not impressed by the form the new protests were taking: on Monday he called any blockade of ministries ‘unacceptable’, stressing was “one thing to hold a demonstration and another to block peoples’ way to work”. In the end, the planned blockade, of course, was something less. 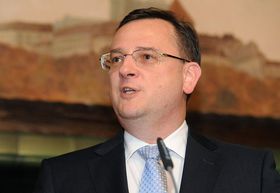 Petr Nečas On the other hand, activists warn, this is just the beginning. Other so-called blockades have been planned culminating with what organisers hope will be the most significant and most vocal on June 7 in front of the Finance Ministry. And there will be more protests just this week: pensioners, like fellow citizens whose hackles have been raised by the government, also plan to voice broad discontent.

Some 1,500 trade unionists from across the Czech Republic are due to demonstrate in Prague on Tuesday to demand higher wages ahead…