As you may know, the two major sports in the Czech Republic are football and ice hockey. You also may be aware that Sparta and Slavia are the two biggest clubs in Prague in both of these sports. This past weekend, the clubs squared off in both sports, and Radio Prague's Yon Pulkrabek was there and now brings us this report. 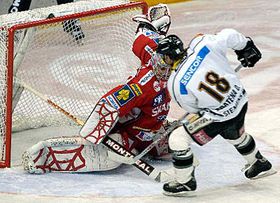 Ondrej Kratena scores, photo: CTK The Czech national anthem opened the first game of the Czech ice hockey Extraliga final series between cross-town rivals Slavia and Sparta. This is the first time that the two teams will be vying for the hockey championship and the 13,388 fans who packed the Sazka Arena, home to Slavia, played witness to a great game on Sunday.

It was Slavia that drew first blood in the tenth minute of the first period, only to have the game tied a minute later. Slavia scored the go-ahead goal in the 34th minute and when Slavia added a third goal four minutes from time, it looked to have the series opener all wrapped up. However, it took Sparta only 11 seconds to pull one goal back and another minute before the game was tied at three goals a piece.

After neither team could score in the ten minute overtime period, the attention turned to Petr Briza in net for Sparta and Petr Franek in the Slavia goal. Both keepers kept out the first three shots they each saw. Both Slavia and Sparta then scored on the fourth series, but the decider came in the fifth series, when Briza denied Slavia's David Hruska while Sparta's Ondrej Kratena managed to slide one into Petr Franek's five hole, giving Sparta a one-zero lead in the best of seven series. 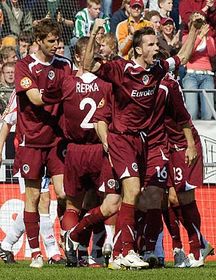 Sparta Prague, photo: CTK Hopes were also high among Slavia football fans on Saturday, when the two clubs squared off in the 263rd derby between the two Prague "S" clubs. The game saw an attendance of 20,318 fans in the Letna stadium, the largest crowd for a Prague derby since 1993. This year, the situation was a bit different than in most years as near-perennial soccer league champion Sparta has been down on its luck and has little chance of crawling into the top spots of the table for a European cup berth. On the other hand, Slavia, the smaller of the two clubs, has been fighting for a birth in the Champions League qualifying rounds. 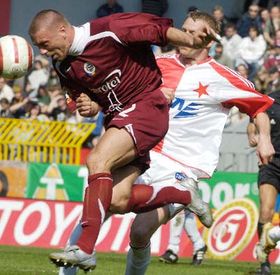 Photo: CTK But somethings never change. Sparta struck first in 31st minute. In the second half, Sparta goalkeeper Jaromir Blazek was sent off in the 54th minute after taking down a Slavia striker. However, Slavia's man advantage lasted only 19 minutes after Slavia stopper Radek Dosoudil was sent off in a very controversial call. Miroslav Slepicka then scored a beauty of a goal in the 86th minute to put the game away for Sparta. Though Slavia managed a consolation goal in the dying minutes, the day, and indeed the weekend, belonged to Sparta.