Friday marks the 40th anniversary of one of the most significant dissident organisations in communist Czechoslovakia. The Committee for the Defence of the Unjustly Prosecuted helped the families of victims of the regime and succeeded in winning international attention for political prisoners. 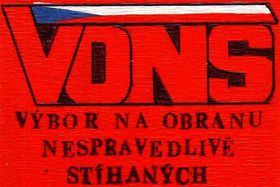 The Committee for the Defence of the Unjustly Prosecuted, VONS to use the Czech acronym, was established on April 27, 1978.

Its four dozen or so members included many of the leading dissidents in communist Czechoslovakia, names such as Václav Havel, Jiří Dientsbier, Dana Němcová and Petr Uhl.

The group’s chief aims were to support the families of victims of the communist regime and to draw international attention to imprisoned individuals who – unlike many of them – were unknown in the West. This particularly concerned isolated dissidents in the regions.

VONS was founded a year after the Charter 77 protest movement, mainly by Charter signatories.

However, the Chartists came from various backgrounds and not all of them welcomed the initiative, says historian Petr Blažek.

“It could be said that the members of VONS tended to be more radical and younger Charter signatories. Except for Gertrude Sekaninová-Čakrtová, none of them were former senior Communist functionaries. Such people tended to look at the committee’s work with mistrust. They were afraid that its activities would endanger other dissident activities. And many of them thought it would overly aggravate the regime.”

While the Committee for the Defence of the Unjustly Prosecuted was set up to help protect political prisoners, several of its founders ended up behind bars themselves.

Indeed, six leading representatives – including Havel – were sentenced to between two and five years in 1979. Petr Blažek: Petr Blažek, photo: Tereza Kalkusová “I think the overwhelming majority of the members who were imprisoned were sentenced for their active participation in VONS. Others, however, were harassed for other reasons. The best-known trial in 1979 – in which dozens of members were originally to be tried – received major international attention. However, many other members were harassed in the following years and most experienced prison or at least custody; forty-eight hour detentions were very common.”

Though its members paid a price, historian Blažek says VONS was undoubtedly a success.

“The committee acquired such respect that its reports were accepted, essentially without verification, by such organisations as Amnesty International. Also in 1984 its member Ladislav Lis was elected deputy chairman of the International Federation for Human Rights in Paris, and that was an extraordinary success.”

Over 11-plus years, VONS produced over 1,100 reports. These were smuggled or relayed by phone to the West and broadcast back into Czechoslovakia via Western radio stations. The group wound down in the 1990s.