All this week we’re broadcasting memories of those who lived through the Russian invasion of Czechoslovakia, which began around 11pm on August 20th 1968. Today we hear from one of our predecessors here at the Radio Prague English Section, Dora Slabá. August 20th 1968 was a normal working day for Dora, who worked as a presenter. When she went home that day she had no way of knowing that she would never come back to Radio Prague. She begins by describing the atmosphere on that perfect summer day in 1968.

“Everybody was euphoric, it was a lovely August day, the weather was fine, everyone seemed optimistic about the future. The communists were trying their best to reform something and we hoped for some kind of liberal progress, although I myself was rather skeptical. I never really liked the communists, never really believed they could produce anything that was worth having.”

So you didn’t believe in ‘socialism with a human face’.

“No, definitely not. And I didn’t believe in Dubček. I didn‘t think he was very bright.”

Do you remember when you first heard about the occupation?

“I heard it during the night. Our secretary from the English Section called me on the phone and said – they’ve come. I woke up with the telephone call and heard the buzzing of aeroplanes and thought – oh dear. But the penny didn’t really drop until the morning when the tanks were rolling in. At the time I lived just round the corner from the radio, so I had them physically under my window. It was uncanny. Nevertheless I thought – well shall I go to work or not? What happens next? I walked round to the radio entrance, and there there were tanks and soldiers and the entrance was barred, so I turned back and went home again. Then I turned on the radio and listened and listened and that was really my entire activity that day.” 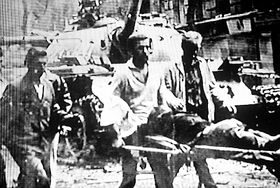 Did you make an attempt after that first day to get into work?

“No, in the meantime we all called each other, those who were employed at the time, and there were a few editors – men only – who did some clandestine broadcasting, but they said that they wouldn’t have women joining in.”

So you sat at home and watched events unfold?

Would you describe yourself as a survivor? Someone who survived events, rather than trying to oppose them or resist them?

“Definitely. I’m essentially a very passive sort of person. I never got involved in politics. I didn’t like it, especially because my family background was very active. I resisted my mother in particular, who was a dedicated communist. So I kept out of the way of politics as much as I could.”

Was she still alive in August 1968 when the Russians came?

“Yes. She was very, very disappointed, because as an idealist she trusted and believed in Dubček. She was the widow of a very prominent communist – that was my step-father – and she actually received from the hands of Dubček the Order of the Republic. She was very proud of the fact. But then of course she became very disenchanted and herself emigrated to England.”

So you must have had some interesting discussions in the early days after the tanks arrived.

“Indeed, yes. My mother was very, very disappointed, and I said – well, I told you so. The whole episode was a paper tiger.”