Dragon boats have been plying their way up and down Czech rivers for nearly ten years. When Sebastian Pawlowski and Hajo Libor had the idea of starting dragon boat racing in the Czech Republic they didn't dream that Czech teams would have so much success. They hold three world records and have won numerous medals in both world and European competitions. Hajo Libor explains what makes the Czechs so successful at this unusual sport. 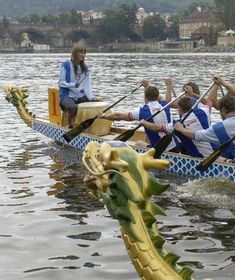 Photo: CTK "I think in the Czech Republic there is not much wind so you can't sail. Therefore you have to go through water by paddling yourself so there are a lot paddlers and rowers in rivers of the Czech Republic."

The very first races were just for fun and since then they have been replaced by professional competitions. The Czech speciality is the Bohemian Cup a series of six races around the Czech Republic. The most recent race took place last weekend in Prague, on the river Vltava.

Twelve and a half metre long boats with heads of dragons at the front and the back lined up for the start. These slim boats carry ten broad shouldered paddlers on each side, a steersman at the back and a drummer giving the rhythm to the crew at the front. All of them smiling happily, as dragon boat racing is about fun.

"Bohemiam Cup is something like NHL in ice - hockey. "

says Petr Klima the organiser, chairman of the Czech Dragon Boat Association and a member of Go Zlute Lazne and TV Prima team.

The team is the most important thing - you can have some individuals but the team makes the result. Everything is about the team and team spirit. And this is why Martin Doktor, Vaclav Chalupa or Ondrej Synek or other individual top sport stars are doing this sport. To win with a group of more than twenty people is something exciting."

Martin Doktor, photo: CTK "Yes, we are just going for a mixed category final for the team Go Zlute Lazne and TV Prima and we hope there will be some medal position for us."

Martin Doktor, also a member of the crew is better known as a canoeist and Olympic gold medallist. Successful in 500 and 1000 metre races he took up dragon boat races to get some company.

"It is a chance for me to do a team sport which is really different to my discipline where I am alone on my boat. Here I am together with another 21 people and it is great fun for me. Until I am sitting in a boat it is not serious for me but when I am in the boat I am paddling like hell because when I am paddling I always would like to be first."

Although it is not very likely fans of dragon boat racing hope that their sport will one day become an Olympic discipline, maybe in Beijing 2008. But in the meantime there are many competitions to look forward to. Petr Klima again.

"Next year in 2006 will be the European Championship here in Prague so let's do it like Olympics." Three months ahead of the start of the winter Olympics in South Korea, the Czech Olympic team has revealed its official winter collection.… 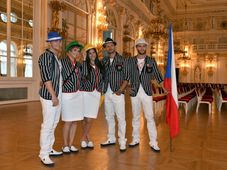 The Czech team for next month’s Olympics Games has just been approved at a glitzy ceremony in Prague. The team for Rio de Janeiro will… Dragon boats race for charity on the Vltava river

Symbolically in the year of the Dragon, the third Dragon Boat Charity Challenge took place last Saturday on the Vltava river. The race…