Tomáš Hertl, a Czech rookie at the San José Sharks, is having a dream debut in the National Hockey League. Indeed, with six goals in only three games, the 19-year-old tops the league’s scoring charts. On Tuesday, Hertl scored four times in the Sharks’ 9:2 demolition of the New York Rangers, becoming the youngest player to do so since 1988. His fourth goal, when he flicked the puck past the goalie from behind his legs, has gone viral on the web. I spoke to Tomáš Hertl’s Prague-based agent Robert Spálenka about the player’s amazing start overseas. 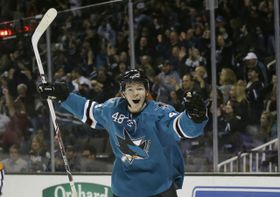 Tomáš Hertl, photo: CTK “Tomáš is a very honest player who works extremely hard off the ice as well. Before going to the US, he was preparing himself for the transfer, and worked hard to be physically ready, with his mind set on succeeding in the NHL. But most importantly, the San José Sharks gave him a chance to play on the first line with two great players, Joe Thornton and Brent Burns, and it’s very important that he has good lines mates who support him and let him feel they are comfortable playing with him, giving him the confidence to be successful.”

Tomáš has been praised for his extraordinary stick work, for the strength he demonstrated in front of the goal, and also for his amazing confidence. How come a 19-year-old NHL rookie is so confident? 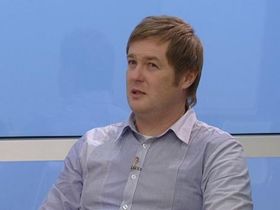 Robert Spálenka, photo: Czech Television “It’s been coming all together since the training camp because San José treated him greatly and put him on the first line since the start with great players. So they gave him that confidence that he belongs there. I’d also say that Tomáš is not only a really good puck handler and a skilled player but he’s also very intelligent and reads the game better than anyone. That’s the reason he’s so successful and confident.”

How difficult do you think it will be for him to keep up the great work he showed in the first three games?

“If you talking about points, I don’t think it will continue throughout the season, that’s for sure. But talking about the level of play, I’m not worried about him because I think he will stay on the top of his game and will play really good. But hard times will certainly come and it will be important how he handles them.”

Some fans here and in the US said Tomáš Hertl could become the next Jaromír Jágr or Patrik Eliáš. Do you think he has the potential to become another superstar of the NHL? 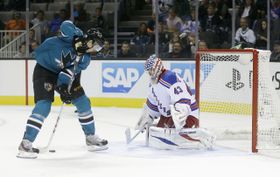 Tomáš Hertl (left), photo: CTK “We all know Tomáš is extremely talented and is willing to work hard, and he has a great personality; you can see a smile on his face all the time, and he’s having fun doing what he loves to do. It’s too early to say if he’s going to be the next Jágr or Eliáš, and I really hope he will be himself. But if you’re asking me if he’s going to be one of the top players in the NHL, then yes, I do think so.”