A monument has just been unveiled in Prague commemorating the support shown to Czech dissidents by the late Dutch politician Max van der Stoel. Forty years ago, on March 1, 1977, his meeting with Charter 77 spokesman Jan Patočka represented a significant breakthrough for the anti-Communist movement, then still very much in its infancy. 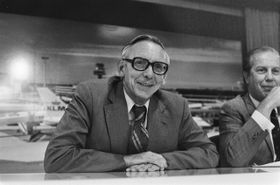 Max van der Stoel, photo: Fotocollectie Nationaal Archief/Anefo/Rob Mieremet, CC BY-SA 3.0 nl On Wednesday Frans Timmermans, the Dutch deputy chairman of the European Commission, and the Czech foreign minister, Lubomír Zaorálek, were among the guests at the unveiling of a monument commemorating Max van der Stoel’s visit at a park already named after him in Prague 6.

Van der Stoel was Dutch foreign minister in 1977 and became the first Western politician to publicly back the Charter 77 movement.

On March 1, less than two months after the publication of what was to become one of the significant protest documents in the Eastern Bloc, he held a secret meeting in Prague with the philosopher Jan Patočka, one of Charter’s first spokespeople.

Historian Petr Blažek is the editor of a new book exploring the secret police’s files on Patočka. He describes the meeting at Prague’s Intercontinental Hotel.

“A short meeting took place at a private room. Patočka mainly spoke. He explained the situation and aims of Charter 77 and said that it was a legal movement, a civic initiative trying to defend human rights and to persuade the Czechoslovak state to adhere to its commitments under the Helsinki Accords.” 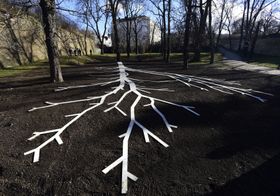 Monument to Max van der Stoel in Prague, photo: CTK Van der Stoel was due to hold talks with Czechoslovak Communist leader Gustav Husák, but he cancelled after learning what had happened.

The Charter signatories were at that time the subject of a crackdown by the Communist authorities and the Dutch support gave them a real shot in the arm, says Petr Blažek.

“It was covered in the Western media and was also reported on by Western radio stations broadcasting into Czechoslovakia. Naturally it represented major support for the Chartists. It meant that somebody was taking them seriously in the West. Patočka himself regarded it as confirmation that their efforts were being taken into account. They regarded it as major support.”

Petr Blažek says the meeting signified the start of a kind of parallel foreign policy, under which the Czech opposition maintained their own ties with the West.

By the latter half of the 1980s, dissidents were frequently invited to events at Western embassies. When Francois Mitterand came to Prague in 1988 the French president made a now famous meeting with dissidents one condition of his visit.