On Tuesday, an eighty-seven year-old former prosecutor called Ludmila-Brožová-Polednová lost her appeal against a murder sentence for her role in the trial and execution of democratic politician Milada Horáková in 1950. Mrs Brožová-Polednová served as a so-called "people's prosecutor" in the communist show trial, and was sentenced to spend six years in prison for the crime. It has been a protracted case, with many twists and turns, but this does appear to eb the final chapter.

Ludmila Brožová-Polednová is an elderly and frail woman from Plzeň and in none too good health. On Tuesday, she appeared in court for the first time ever to face charges of complicity in the murder of Milada Horáková, a revered anti-Nazi democrat, who ended up being a thorn in the side of the subsequent communist regime. In 1950, Mrs Horáková was executed after a Stalinist show-trial following months of torture.

I spoke with historian Tomáš Bursík and asked him how important he thought this verdict was:

“The court verdict should be viewed more in symbolic terms. But I do think it is groundbreaking in the sense that what was happening here in the 1950s not just by the secret police and their apparatus, but also in the corruption of the judicial process, has been recognized. The crimes of the regime were not just committed by members of the security apparatus, but there were all kinds of other people – lawyers, judges, and they too bear the responsibility for prosecuting numerous innocent people during the 1950s.” 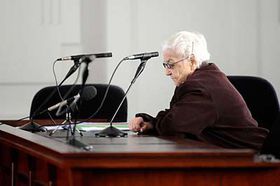 Ludmila Brožová-Polednová, photo: CTK The court was moved to Mrs Brožová-Polednová’s home town on the grounds of her health. Her guilt had already been established by the Prague Municipal Court in 2007 – the defendant was sentenced back then to an eight-month prison term. However, that sentence was subsequently overturned by the High Court, which ruled that the crime had exceeded the statute of limitations. Much legal wrangling followed, involving the Supreme Court, Prague High Court and ultimately the Plzeň High Court. It was at this last venue that the six-year prison sentence was handed down on Tuesday. Yet Tomáš Bursík believes there is a larger and more important picture that still needs to be addressed: 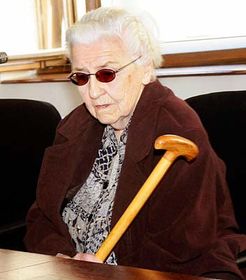 Ludmila Brožová-Polednová, photo: CTK “I’ll be honest, for me it really isn’t that important whether Ms Brožová-Polednová does or does not end up in prison. You could say that she has the ‘misfortune’ as it were of living for as long as she did. On the other hand, I was very surprised that she actually showed up at the trial. She may be one of the highest figures prosecuted from that time, but the process should be looking at the numerous party apparatchiks and so on – working from the top down and not the other way round.”

Mrs Brožová-Polednová’s defence team had argued that the defendant was only a first-year law student at the time of the trial in 1950. They had also argued that she was only a small part of a larger machine. On the other hand, she did not express remorse or regret, other than saying that the death sentence handed down to Milada Horáková was too harsh. It is perhaps unlikely that Ludmila Brožová-Polednová will actually spend time in jail because of her poor health, while she also now has two months to ask for a judicial review of the ruling. 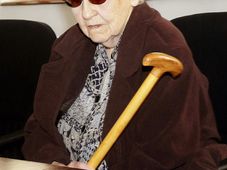 Právo: former ‘People’s Prosecutor’ could be released as early as next year 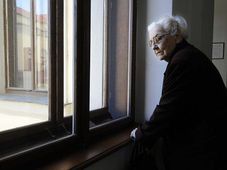 Ludmila Brožová-Polednová, a former communist prosecutor who is serving a six year prison sentence for her role in helping to send…