The Czech government crisis took an unexpected twist on Friday when the embattled Prime Minister Bohuslav Sobotka announced he would not hand in his resignation to President Zeman as expected but would propose the dismissal of Finance Minister Andrej Babiš instead. The prime minister said his decision to resign and bring down the government over Mr. Babiš’ suspect finances had been thwarted by the head of state and no longer made any sense. 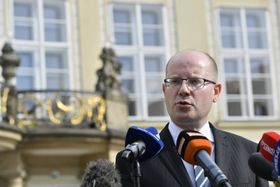 Bohuslav Sobotka, photo: CTK Prime Minister Bohuslav Sobotka, widely considered one of the most predictable politicians on the Czech scene, dropped his second bombshell in a matter of days on Friday. After clashing publicly with President Miloš Zeman over the government crisis on Thursday, the prime minister unexpectedly changed tack announcing he would not go through with his decision to resign from office.

“The reason for my demise was to enforce the principles of political ethics in this country. I planned to resign in order to bring down the government and with it Finance Minister Andrej Babiš. However in view of the latest developments and the fact that the head of state would only accept my own resignation such a step no longer makes any sense. I have decided instead to propose the dismissal of Finance Minister Andrej Babiš and hope that in this case at least the president will act in line with the Czech constitution and recall him from office without further delay.

The prime minister said that the continued presence of ANO leader Andrej Babiš in the government was unthinkable. He cited not only the suspicion that the finance minister had likely engaged in financial machinations to avoid paying taxes but the release of two recordings of the finance minister’s phone calls in which Mr. Babiš is heard speaking to a journalist from a newspaper in his trust fund about sensitive information dug up on a number of politicians and advising him to hold the information for the time being since it would be put to better effect ahead of the October general elections. 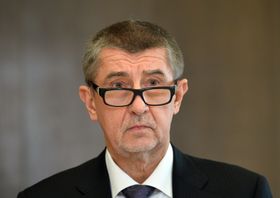 Andrej Babiš, photo: CTK “Either of those cases – be it suspicion of tax evasion or the attempt to influence newspaper coverage to damage political rivals would be enough for a politician to hand in his resignation. Any other member of the cabinet would have done so already. Unfortunately Andrej Babis is incapable of self-reflection, incapable of making a decision in favour of the government and the country.”

Finance Minister Andrej Babiš responded by saying he would leave his fate in the hands of the president and accused the Social Democrats of orchestrating a smear campaign against him. Meanwhile, the head of the opposition Civic Democrats Petr Fiala reiterated his call for early elections, describing the present state of Czech politics as a theatre of the absurd.