A small piece of history was made on Monday morning as the U.S. broadcaster Radio Free Europe formally handed over the keys to their former headquarters to a new tenant: the National Museum. The iconic steel and glass building a few metres from the top of Wenceslas Square has gone through several incarnations over the decades, but the latest will see its doors finally thrown open to the public. 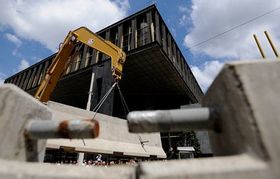 Photo: CTK A crane lifted concrete barriers onto a flat-bed truck outside what used to be Radio Free Europe on Monday, watched by a crowd of TV crews and politicians. The barriers were put there eight years ago amid fears the Prague-based U.S. broadcaster could be targeted by Islamic extremists in the aftermath of 9-11. The barriers and the armed police are now being removed, as the monolithic steel and glass building begins a new lease of life – an extension of Prague’s National Museum just across the road.

The building has served many masters: before Radio Free Europe it was home to Czechoslovakia’s National Assembly, a communist illusion of parliamentary democracy that rubber stamped the politburo’s laws. The communists in turn built the parliament literally on top of the pre-war stock exchange – the bourse is virtually cocooned inside it. A lot of history is tied up here, as Michal Lukeš – the director of the National Museum - explained to reporters inside the building’s great hall: 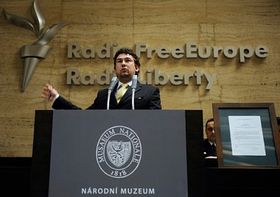 Michal Lukeš, photo: CTK “Many people have spoken from this lectern – Gorbachev, Thatcher, Bush. Many important things have happened inside this building; Czechoslovakia was formally dissolved in this very room, Václav Havel was elected president here, but few people know about it and few have been inside. So the first thing we’re going to do – from 15th August – is to start guided tours of the building to the public, to give them the possibility to look inside and find out what the National Museum has planned.”

One man who’s seen the many incarnations at first hand is the veteran Radio Free Europe journalist Pavel Pecháček. RFE recently relocated to a purpose-built broadcasting building several kilometres away at Prague’s Hagibor. I asked Pavel for his feelings on this day.

“It’s the end of another chapter of Radio Free Europe, and also our beginning. The new building in Hagibor is really a real radio building.” 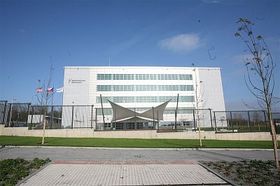 New RFE building in Hagibor, photo: www.rferl.org So it’s the end of an era really, isn’t it?

But the beginning of a new one, as you say.

“I believe so, because now we broadcast in 29 languages, and the Czech Republic is practically giving the United States what they were receiving for fifty years.”

The guided tours that start in August are of course just the beginning. The first proper exhibition – called Be Free! - will open on November 17th, the 20th anniversary of the fall of communism. In two years’ time an ambitious renovation project will start, incorporating a pedestrian tunnel to connect the new National Museum building with the old.