Englishman to swim 175 km to Prague

Paul Whitaker likes a challenge, but he is no seasoned endurance swimmer. At least not yet. Last October, the 41-year-old Englishman with a fondness for adrenalin sports set himself a goal, and decided to swim the 175 kilometres from the South Bohemian city of České Budějovice to Prague, almost all the way down the Vltava, and all for a charity challenge. Earlier today I had the pleasure of inviting Mr Whitaker into the studio and talking to him about his big plunge. 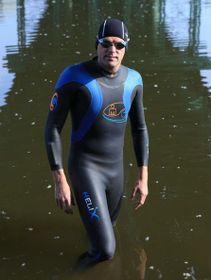 Paul Whitaker “It was completely my idea, yeah, no one forced me into it, I made the decision myself.

And so what’s the point? Can you tell me about the charity project?

“Sure. Originally the point was just for myself, to have some tough physical challenge. And then, because it was such an unusual and extreme idea I decided I could use it for good benefit and help a Czech charity called Asistence, which works with physically and combined handicapped people. The idea is to raise as much money as possible for this charity, to help them fund their projects helping handicapped people get by in life.”

You told me you haven’t done anything like this before, so how did you get the idea?

“In the shower. It was just one of those flash moments where these crazy ideas just came into my head, and I started thinking about it, and thought ‘hey, yeah, I could actually do this’! So it’s going to be interesting.”

It doesn’t sound very appetising, having your head in the Vltava River for... you said 18 days?

Is it not filthy?

“It’s got a lot better over the years. I was a bit concerned about that in the beginning. But I’ve asked a few people who work in the industry and they say that it’s much better than it used to be. I’ve not had any problems; I’ve been training in there for a while. And I think it’s fine.”

Are there any kinds of obstacles along the way?

“Since they put all the reservoirs in, it’s made the river very calm. Most of the time I’m going to be swimming in still water. However, at the end of the end of the reservoirs, once I go past the dam, on the opposite side of the dam the release water – not from the top, but from the middle or the lower part of the reservoir. So the water is freezing cold, about four to six degrees. So that’s going to be the only difficult part, getting into almost icy-cold water.”

So how many hours a day will you be swimming, what’s the regime?

“The plan is to swim every morning for about three hours. So I hope to start around nine or ten o’clock and continue until lunchtime.”

Will you have a boat following you?

“Yes, not such a big one, definitely not a motor-powered boat, but I’ve got an inflatable canoe and there will be two people paddling it...”

“They will probably be drinking beer along the way, and hopefully they’ll still be able to pass me my energy drinks and just basically navigate the way, and make sure that I’m not going to swim into any floating obstacles or anything that’s there in the river.” 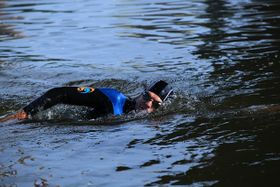 Paul Whitaker Has anyone ever done this before?

“As far as I know, two people have. One is a Czech woman, Yvetta Hlaváčová. She holds the Czech record, she swam 142 kilometres. So I’m hoping with this swim to break the Czech record, though it won’t officially count, because I’m not Czech. However, a Slovenian guy, Martin Strel, actually swam further than me; he swam from Lipno to Mělník. But he’s the guy who holds the world record for the longest ever swim when he swam over 5,000 kilometres down the Amazon. So these are the two people that I know of who have done this before. But they’re also top-class, professional swimmers, and swimming is definitely not part of my background.”

What’s the best you can hope for out of this? When it’s all over and you’ve finished your swim, what would you consider a real success?

“It’s all about getting money for Asistence, so for me, a real success is raising a substantial amount of money that I can give to them that will help do some good for people who need it.”

Do you have a particular sum in mind that you’d like to reach?

“I’d like to give them at least a quarter of a million crowns. And, you know, in the current financial crisis it’s proving to be difficult. But I’m still working on that, and hopefully with contributions from the public that will be possible. If anybody’s interested in looking at the website with all of the details and making a contribution they can look at www.vltava2010.cz and all of the information is there.” 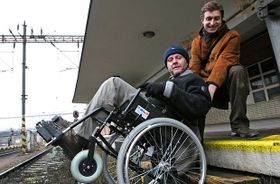 Asistence And you’re starting on Monday, you say it’ll be 20 days and 18 of those days spent swimming, so can we also follow your progress on the website?

“On the website there’s a blog – or a link to a blog – and, depending on the internet collection, I’m hoping to be able to write every day; just basically my feelings, how it’s going, and to keep people updated on the project.” Czech hardy man Jaroslav Chytil, 42, has just made headlines by conquering the North Channel. The strait between Northern Ireland and… 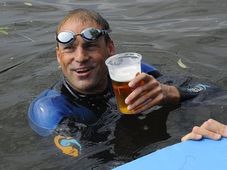 Paul Whitaker arrived in Prague on Saturday from a swimming challenge that took him 18 days to complete. The 41-year-old Englishman… 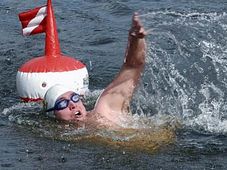 Czech long-distance swimmer David Čech has succeeded in swimming the Strait of Gibraltar both ways, becoming the fifth person in the…