A two-day EU summit in Brussels started on Thursday with a spat between the newly elected French President Emmanuel Macron and countries of the Visegrad group. Expressing his commitment to put the EU project back on track, the French leader accused the V4 of defying Europe’s principles and values by rejecting the EC’s migrant quotas. 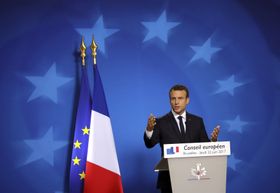 Emmanuel Macron, photo: CTK For many this summit in Brussels signals hope for the future of the European Union. The arrival of the French leader committed to relaunching the European project side by side with Germany and the pending exit from the club of the largely Eurosceptic Brits, gives Euro-optimists hope that the alliance can overcome its recent difficulties. European Union chief Donald Tusk expressed the hope that the worst of the alliance’s problems were over:

“Never before have I had such a strong belief that things are going in a better direction.”

However even before the summit had started President Macron and countries of the Visegrad Four exchanged angry words. In an interview for Le Figaro, Emmanuel Macron slammed the leaders of the Czech Republic, Slovakia, Hungary and Poland, for allegedly defying Europe's principles and values by refusing to pull their weight in the bloc's refugee-sharing plan. He reminded them that the EU was not only about funds but was “a community of values” and said they could not treat the alliance as “a supermarket”. The words elicited an angry response from the countries in question. Czech Prime Minister Bohuslav Sobotka:

“We certainly do not perceive the EU as a supermarket and the Czech Republic never questioned the need for solidarity in resolving problems such as the migrant crisis. Nevertheless, we do not see mandatory quotas and the redistribution of migrants as a viable solution. It is a big security risk and only fuels illegal migration to Europe.”

Hungary’s Prime Minister Victor Orban echoed this sentiment, reminding President Macron that it was France not Hungary which had been forced to introduce a state of emergency due to these problems. Polish Prime Minister Beata Szydlova asked whether the French president wanted to flaunt his prejudice against Central European states in the media or have a rational debate. All four states previously said they were showing solidarity in other ways – by sending money and providing aid to the countries from which migrants are fleeing as well as helping the EU states hardest hit by the migrant wave. Slovakian Prime Minister Robert Fico, Emmanuel Macron, Bohuslav Sobotka (from right to left), photo: CTK While migrant quotas are only a part of the EUs present problems – the exchange indicated that the arrival of the Euro-optimistic French president would not guarantee the EUs plain sailing in the months to come. Some say his arrival will only speed up the process of a two tier Europe –which in many ways already exists and point out that the central and east European states will have to make up their minds about whether they want to be in the fast or slow lane. And although Emmanuel Macron claims he does not want to deepen the divide between East and West critics from the V4 see his efforts to curb “cheap labour” from these countries as just that.