On occasion of the 70-year-anniversary of the Heydrich assassination, an exhibition on the subject has opened in Israel’s Parliament, the Knesset. While the assassination of Reinhard Heydrich is one of the most significant events in modern Czech history, the story of how the governor of the occupied Czech lands was killed is relatively unknown in Israel – despite the fact that Heydrich was one of the main architects behind the Final Solution. 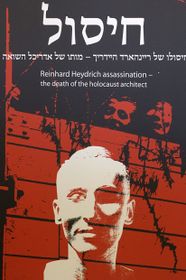 The briefcase in which the assassins carried the bomb that was to kill Reinhard Heydrich, a facsimile of the bomb used in what was codenamed “Operation Anthropoid”, personal items of Josef Gabčík, one of the three parachutists who killed the senior Nazi official – those are just some of the pieces on display at an exhibition on the Heydrich assassination that opened in the Israeli Parliament, the Knesset, on Wednesday. Czech ambassador Tomáš Pojar says the idea was born when the speaker of the Czech Senate visited the embassy two years ago.

“Then it was decided that bringing the exhibition to Israel on the anniversary would be welcomed by the Israeli side. One of the reasons we chose this topic is that the story of Heydrich is not very well known in Israel, despite the fact that he presided over the Wannsee Conference and was very instrumental in the Final Solution. The story that is known in Israel is that of Adolf Eichmann, but Heydrich was Eichmann’s superior.” 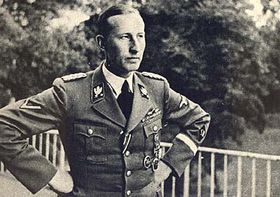 Reinhard Heydrich Czech and Israeli officials hope that the exhibition will raise awareness of the role Czechs played in bringing down the brutal Nazi leader in one of the most courageous attacks of the Second World War. The assassination prompted gruesome reprisals by Nazi Germany; an estimated 5000 Czechs were killed in revenge. Ambassador Pojar says Israeli media have been covering the exhibition.

“Several articles have been published prior to the exhibition, so the story is becoming more known. The exhibition opened in the Knesset; so sadly, it is not open to the public yet. But after that, the exhibition will move to Tel Aviv and the northern area of Israel. Within the next three months, it will be on display at three different locations, so I hope that more people from the Israeli public will be able to attend it.”

The chairwoman of the Czech Parliament, Miroslava Němcová, is in Tel Aviv on occasion of the opening. While the exhibition is devoted to one very specific chapter of history, it seeks to place the Heydrich assassination into a broader context and shed light on the quality of Czech-Israeli relations. The two countries’ relations are flourishing, says the ambassador. Miroslava Němcová (center), photo: Břetislav Tureček “And it is not only on the political level, but also the relations of the Czech people and the Israelis, Czechs and Jewish people, cultural relations, trade relations. I must say that I am very glad that we do see those relations flourish on many different levels. More contacts are being established and more joint projects are happening.”

The above-standard relations between both countries were obvious during Benjamin Netanyahu’s recent visit to Prague: The Israeli prime minister said the Czech Republic was Israel’s “closest ally” within Europe.