According to the latest figures, strict measures have markedly reduced the basic reproduction number of Covid-19 in the Czech Republic. Health officials say that if that figure remains at its current level, around 8,000 cases may be recorded in this country by the middle of April. 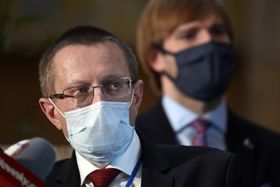 Ladislav Dušek, photo: ČTK/Michal Kamaryt April 1 is exactly a month since the first three cases of the new coronavirus were registered in the Czech Republic and at time of writing 3,330 cases have been registered in the country. Thirty-two people with Covid-19 disease have died.

Speaking to the media on Wednesday morning, the director of the Institute of Health Information and Statistics, Ladislav Dušek, offered some relatively reassuring figures.

When the coronavirus pandemic reached the Czech Republic, Mr. Dušek said he and his colleagues forecast a basic reproduction rate of 2.6.

This means that every person with the virus could have been expected to directly infect 2.6 others on average.

However, the first wave of government measures aimed at curbing infections brought that figure down to 1.84.

After a state of emergency was declared on March 12 the figure dropped more – and since all but essential movement was banned the number has fallen further still.

Mr. Dušek said that if the basic reproduction number were to fall below 1.0 then the Czech Republic would have the coronavirus under control.

As for likely total numbers of infected in the near future, the health data chief said a continued rate of 1.1 would spell infection rates considerably lower than in many states: 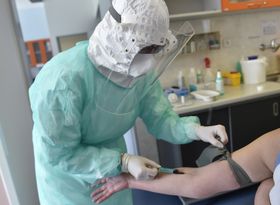 Photo: ČTK/Dalibor Glück “This optimistic outlook would mean, if this model is repeated, 8,000 newly diagnosed cases would be recorded by the middle of April. The figure of 8,000 has a spread from 5,600 at the lowest to 12,300 in the worst possible scenario. Nature will show us what the truth is.”

Following identical expectations, the number of confirmed Covid-19 cases at the end of April would be 14,000, with a best possible estimate of 7,200 and a highest one of 30,000.

Mr. Dušek said the current coronavirus mortality rate was 0.25 per 100,000 inhabitants, adding that this was very low.

He said around 13 percent of those infected receive hospital treatment, with that number reaching roughly 400 to date. Of those, a quarter typically require intensive care. 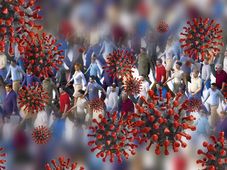