Federer arrives in Prague ahead of first Laver Cup

The most successful tennis player in professional tennis and winner of a record 19 grand slams Roger Federer is in Prague, with the days counting down ahead of the first-ever Laver Cup. The tournament will pit Team Europe and Team World against each other, captained by tennis legends Bjorn Borg and John McEnroe. Understandably, both sides want to win. 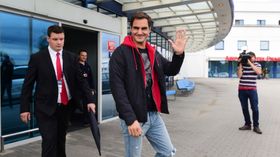 Roger Federer, photo: CTK In one side, Team Europe: Federer, Nadal, Cilic, Thiem, Zverev and Berdych, captained by Bjorn Borg. Against them, Team World: Sock, Kyrgios, Isner, Querrey, Del Potro, and Shapovalov, captained by John McEnroe. Team Europe, is favoured, with two top-ranked players in the world. But don’t count out Team World: everyone knows how McEnroe, one of the best serve-and-volley players to ever play the game and equally famous for his once explosive temper (leading to the nickname Superbrat) hates to lose.

Betting agencies know which way they are going, offering 1.33 odds on Team Europe and 3.20 on Team World. 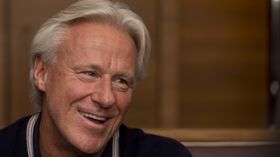 Bjorn Borg, photo: CTK The big winners, though, should be viewers and attendees: above all, Roger Federer made clear, the Laver Cup was about good tennis and tough competition. In Prague on Monday, he suggested no one should compare the tournament to an exhibition.

“I know some people mentioned that word and I don’t even like it. It should not be that case because we are playing in honour and the legacy of Rod Laver.

“Bjorn Borg definitely wants to win, John McEnroe, I know he does not want to lose, even though we are the big favourites. So I really hope all the players are going to ‘show up’ here and really want to win.”

Federer was in Prague in February to promote the new tournament, even trading serves on a court on a boat under Charles Bridge with friend and fellow Team Europe member, Tomáš Berdych, the Czech men’s No.1. Federer made clear on Monday that interest in the Laver Cup since then had exceeded even his expectations. 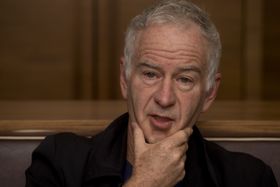 John McEnroe, photo: CTK “I was here a few months ago to promote the event and hopefully to have tickets sell out. And they sold out in record time.

“So to be back here now, a few days away from the start of it all, it is really nice to see how far the Laver Cup has come… It’s nice to be back in Prague, I love this city and I can’t wait to play here.”

The Laver Cup begins on Friday and will be broadcast by Czech TV; it is not yet known who will play in the opening match: a day before, captains Borg and McEnroe will submit their line-up cards for Friday’s matches to a referee in a blind exchange, and the match-ups will only then be revealed at a special on-court ceremony.