Fifty years ago on January 5, 1968, the news came out of the ongoing central committee party meeting of the Czechoslovak communist party that Slovak, Alexander Dubček, had been chosen as the new party boss. Dubček was little known in Czech circles but his name would soon be known around the country and the world. 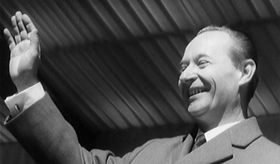 Alexander Dubček, photo: Czech Television A struggle for power between reformists and conservatives had been going on in the ruling communist party for several years. But this was kept well away from the prying eyes of the public. Before the central committee meeting, the incumbent general secretary and president Antonín Novotný had been fighting a bitter rearguard action. But it was clear that his leadership and policies were increasingly under fire and that changes were sought. But, as historian Zdeněk Doskočil points out, Dubček was not a clear favourite to get the top job.

ʺDubček was basically chosen as a compromise candidate. He was seen as a potential replacement for [Antonín] Novotný as earlier as the autumn of 1967. The reason was his interventional at the central committee communist meeting in October that year. Dubček criticised the conditions within the communist party, its methods and fashion of governing, and the economic policy being pushed by Antonín Novotný with respect to Slovakia.ʺ 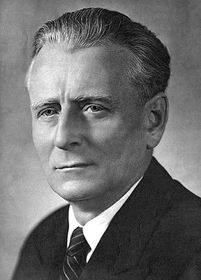 Antonín Novotný, photo: Public Domain Dubček’s criticism brought recognition, but also a backlash in which he was tainted with the brush of Slovak nationalism. And, at that stage Alexander Dubček was still developing his ideas and party position which was still not even fully defined when he landed the top party post. Zdeněk Doskočil again:

ʺDuring the 1960’s Dubček had developed his opinions. When he got to be in the top party hierarchy at the beginning of the decade, it was not really possible to say that he was a great reformer or liberal. But in 1963 he was the first party secretary in Slovakia, that I the highest party functionary in Slovakia. And he began to realise from the functioning and mechanism of government that his hands were tied there and he did not have much competencies. And it was gradually as he was faced by realities that resulted in him taking a more liberal and reformist position.ʺ

Dubček’s general backing for reform and Novotný’s final relinquishment of the presidency in March 1968 was clearly a signal to many inside the communist party and outside whose reform ambitions went a lot further than the new general secretary’s. And to some extent this gave the impression that Dubček was being pulled along by others and the pace of events themselves:

"Without doubt we can say that Dubček had reformist ideas, although we should say that these ideas had a rather foggy outline. Dubček was aware that many aspects of the then communist party rule were hardly acceptable going forward. He certainly wanted to change how things were in the republic. But he did not have an established and thought out programme of action. 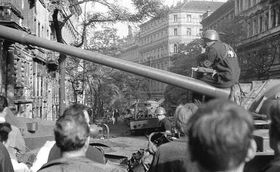 Soviet-led invasion in August 1968, photo: archive of Czech Radio His ideas for change were more instinctive than set out in a programme. That meant that in the Spring and Summer of 1968 Dubček was undoubtedly surprised by the wave of social action and turbulence that gripped the whole country.ʺ

And that was perhaps played a part in the tragedy that followed. In spite of all the assurances given and warnings received, Dubček and the reformers could not turn back. The Soviet-led invasion took place in August 1968.