There was a sad end to the story of a Romani “prince” from Romania on Monday when the 17-year-old boy died at Prague’s Vinohrady hospital. The boy – heir to the ‘throne’ of a Romani Olach clan – spent two weeks on a life support machine after almost drowning in a lake near Prague. Czech officials seemed at a loss on how to deal with the dozens of relatives who descended on Prague to be near him, and there’s now some confusion over who will pay for his body to be returned to his homeland. 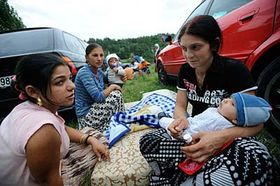 Photo: CTK The story began with a swimming accident on July 22nd at a lake near the town of Stará Boleslav. The boy spent a long time underwater, and had been in a critical condition ever since. According to Roma tradition, dozens relatives and members of his extended Romanian clan came from all over Europe to be near him.

At first they camped out in front of Vinohrady hospital itself, but were persuaded to move to a campsite, before spending several nights in various locations in and around Prague – to the barely disguised displeasure of local mayors, one of whom said the police should simply deport them back to Romania.

The boy had shown cautious signs of improvement, with reports he had started breathing on his own. He remained, however, hooked up to a life support machine and there were later claims that his kidneys had failed. On Monday August 3rd it was announced he had died of a brain seizure, after twelve days in hospital. 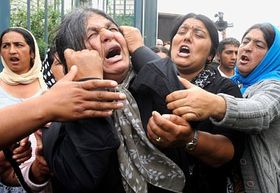 Photo: CTK In death, as in life, however, the Romani prince is proving controversial. For a start, it seems the 17-year-old had no health insurance in Romania, so the hospital will have to recover the costs of his treatment themselves. That will be a substantial amount of money – probably in the region of 50,000 – 60,000 dollars.

Then there’s the cost of returning his body to Romania, estimated at 4,000 - 5,000 dollars. Originally, his family wanted to transport the body themselves, but they were told this wasn’t possible. Instead, they were required to use a special hearse provided by a Czech undertaker.

Who will pay for it remains unclear. Initially there were reports from the boy’s family that they had only around 1,400 dollars, and a family member was quoted as asking for help from Czech citizens. At this point, the mayor of Prague Pavel Bém stepped in, with a city hall spokesman saying Prague would pay for the transfer. 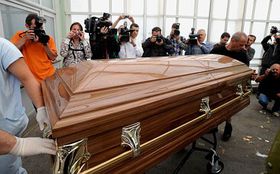 Photo: CTK Incidentally, this was not due to any great generosity on their part – according to Czech Television, it was simply cheaper than paying for the teams of city police deployed to monitor the groups of Romanians camped outside the hospital and elsewhere.

On Tuesday, however, it emerged that the family had declined Prague’s offer, and will pay for the transfer themselves. At least some of the costs – 1,000 euros - are being covered by the Czech men’s magazine Maxim. The publication’s editor-in-chief told the media that Czech society was full of xenophobia and racism, and he wanted to show the 'Aryan' Czech society that in death and not only in death we are all united, regardless of race.

This was an unexpected twist in the tale, but also proof that the whole story – with its images of Romanian Romani women in headscarves camped out in the streets of Prague – has fuelled a real debate of just how tolerant – or otherwise – Czech society is of foreigners, even those who found themselves at the centre of a very human tragedy.