The newly-elected Czech prime minister, Andrej Babiš, went to the EU summit in Brussels with two priorities uppermost in mind: defending the country’s anti-migrant stance and gaining more allies in the block. However neither his arguments nor a financial pledge of 220 million euros in aid of the migrant crisis helped him to avert the threat of legal action from Brussels. 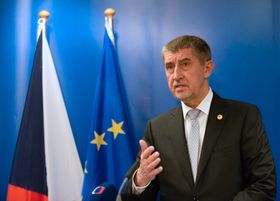 Andrej Babiš, photo: CTK Andrej Babiš’ hopes of contributing to a breakthrough on the thorny issue of migrant quotas were dashed on the first day of the summit which revealed a deep divide between some of the founding members and the countries of Central and Eastern Europe who have, for the most part, refused to accept their allotted quota of migrants.

A financial pledge by the Visegrad Group states to provide 35 million euros for Italian-led projects to beef-up Libyan borders – as an alternative form of assistance in dealing with the migrant crisis- failed to have the desired effect.

Italy’s Prime Minister Paolo Gentiloni welcomed the contribution but said money was not enough. This sentiment was echoed by Dutch Prime Minister Mark Rutte and German Chancellor Angela Merkel, who stressed that there “cannot be selective solidarity among EU member states”.

Although EC president Jean-Claude Juncker welcomed the contribution and improved communication with the Visegrad Group, there was no indication that the EC would reconsider its decision to sue the Czech Republic, Poland and Hungary over their unwillingness to take in refugees.

And, while he indicated that he would seek further talks with the EC president on the matter, Andrej Babiš told journalists in Brussels that Prague would not try to avoid legal action by accepting even a small number of refugees as was the case of Slovakia. This is a matter of principle, we cannot resolve this by accepting 20 refugees, he said. 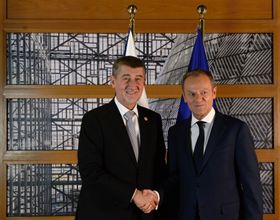 Andrej Babiš, Donald Tusk, photo: CTK While the Czech prime minister noted that some EU members were aggressive on the matter of quotas, he said he found “a voice of reason” in the head of the European Council Donald Tusk.

“My most significant meeting was with the head of the European Council Donald Tusk, the first Brussels representative who found the courage to say out loud what we think about the quotas – that that they are divisive and ineffective.”

As Prime Minister Babiš repeatedly pointed out in talks with EU officials, Czechs feel strongly about the issue of migrant quotas as was evident from the election success of the anti-migrant Freedom and Direct Democracy Party. Enforcing them would, according to Babiš, only further reduce trust in EU institutions.