First ever meeting between Sparta and Liverpool fails to entertain

On Thursday night the Czech Republic’s most successful soccer club, Sparta Prague, played host to England's most successful club, Liverpool. There had been a huge amount of media coverage in the week leading up to Liverpool’s first appearance in the Czech capital, with the Reds’ visit dominating the sports pages. However, in the end the Europa League tie proved to be something of a damp squib, ending in a scoreless draw. 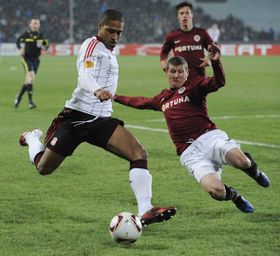 Glen Johnson, Manuel Pamič, photo: CTK There was a charged atmosphere on Thursday night at Sparta Prague’s Letná Stadium, as the seconds counted down to the club’s Europa League round of 32 first leg tie against Liverpool. The English club have won the competition three times, and lifted the more prestigious Champions League trophy five times, and this was their first ever game in the Czech capital.

However, the match failed to live up to the expectations of fans who had shelled out to see one of the world’s biggest clubs in action. Liverpool, missing the likes of Steven Gerrard, created very few chances in a game that ended 0:0, and while the Reds’ goalkeeper Pepe Reina saw more of the ball than his opposite number Jaromír Blažek, Sparta never really came close either.

Sparta midfielder Marek Matějovský said he was disappointed by the game, but at least it was still possible for the Czech champions to progress to the last 16. Jaromír Blažek, Tomáš Řepka, photo: CTK “Definitely, that result gives us a chance going into the second leg. Everybody knows that English teams really trust in home advantage. I think they came with that in mind, and wanted to go home with that kind of result. I personally don’t think they did too much up front. So they’ll be confident at home, but let’s hope we get a goal so they lose that certainty.”

An interesting aspect of the match was that it was Liverpool manager Kenny Dalglish’s first time at the helm in Europe. One of the club’s greatest ever players, the 59-year-old previously managed them in the late 1980s when English clubs were banned from continental competition in the wake of the Heysel disaster.

“It’s an honour to be in charge of this football club at any stage. But to take them into Europe, because of the history the football club has in Europe, is always special. Although we’ve had a lot of success in the Champions League, that doesn’t mean that because this is the Europa League it’s any less important to the people that are involved at the moment. We’ll do our best to go as far as we possibly can in the competition.” 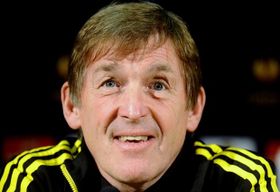 Kenny Dalglish, photo: CTK Mark Lawrenson was a team-mate of Kenny Dalglish in the 1980s, when Liverpool dominated English football. He was far from impressed by Thursday night’s game at Letná.

“I would say quite easily that’s the worst game I’ve seen since the start of the season. But, you know, it was difficult for Sparta Prague, because they haven’t played competitively for two months, and you had a Liverpool team who were a little bit in transition and will probably be delighted with a 0:0 draw. But I thought if they had tried to score they might have got a little bit more out of the match.”

Were Liverpool on auto-pilot tonight?

“I think a little bit. Obviously, they weren’t quite sure what Sparta Prague were like. They’d probably not watched them because they hadn’t been able to watch them and see exactly what they had. But Liverpool played a little bit warily. I think to take off your centre forward with 10 minutes to go and replace him with another centre back told you they were very pleased with a 0:0. It will be a very different game at Anfield, but the problem, and the risk that Liverpool run, is that Sparta Prague may score a goal. And an away goal in this competition at 0:0 could be priceless.” 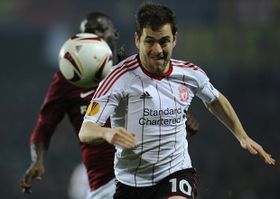 Joe Cole, photo: CTK For his part, Liverpool’s manager promised his players would put in a better performance in the return leg at Anfield.

“We’ve got 0:0 here. Another game to come next Thursday. We’ll soon find out if we can get through that, but I think it will be a different game than what it was tonight. Next week the onus is on us to be more creative than we were tonight.”