The fourth Food Film Festival brought documentaries from around the world to Prague’s National Technical Library over the weekend. Morgan Childs visited the one-day event to find out what it had to offer. 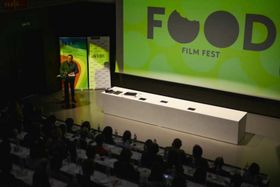 Festival interpreter Halka Varhaníková told me why the food series is a natural extension of the larger festival, held at the Czech University of Life Sciences. "For example, The Empire of Red Gold is a film that talks about the way that food travels across continents and what the implications of that are, that we might not even know what we are eating when we eat tomato sauce, for example, in this case. So the discussion that follows always talks about the topics that the film opens up so people have a chance to talk with experts in the field and discuss the questions that were raised by the film. So that's the whole idea: food, film, and the discussion, the debate that follows."

Festivalgoers had a chance to smell and taste the science behind the films, with pairings intended to bring the systems and processes behind the food to life. The organizers argue, as this year’s slogan proclaims, “The more you know, the better you eat.” Varhaníková explains.

"If you know, for example, how a certain kind of food is produced—for example, processed food—then you realize that it's maybe not very good for you. So the idea behind the debates, and often it's the idea behind the films, is that we should think about what we eat. We should not just consume anything you can get in the supermarket because that might not be very healthy. And it usually isn't. For example, if you eat standard meat that you buy in a supermarket, the animal has lived in a not very good environment. 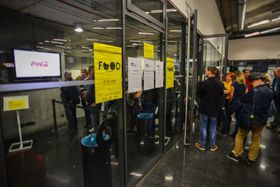 Photo: Archive of the Food Film Festival "A couple of years ago, there was a really interesting film about meat production from Australia, it was an Australian film crew who make a film about people in the States who grazed the cattle in the open. One theory says that if you want to save the planet, you have to stop eating meat, because it's impossible to produce enough meat to then feed people. But if you have cattle that grazes grass and you use different kinds of animals that graze the same area, then you get excellent grass because it's fertilized by the manure, and then you get fantastic meat with very little bad ecological impact. So there are questions like that that if you think more about what you buy it affects the way that food is produced, and then it can have a very important impact on the environment."